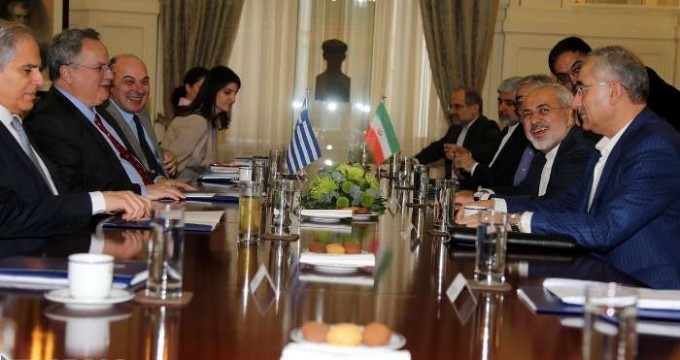 Tehran, May 28, IRNA – Ministers of foreign affairs of Iran and Greece, in a meeting in Athens on Thursday, conferred on the spread of terrorism across the world, calling for collective efforts of all governments to counter terrorism and extremism.

During the meeting, the visiting Iranian foreign minister said that economic relations between Iran and Greece had been affected by foreign pressures and economic sanctions over the past few years.

These should be improved by further consultations between officials of the two countries, he added.

Referring to ancient civilizations of Iran and Greece, Zarif said that Iranian and Greek peoples have proved that they will stand against hardship and foreign pressures.

Greek Foreign Minister Nikos Kotzias, for his part, said that his country attaches special significance to expansion of relations with Iran in different areas, including economy, culture, tourism, energy and agriculture.

Kotzias said that Athens would make use of its influence to remove the obstacles on the way of cooperation between Iran and the European Union.

The two sides also called for establishment of direct flights between Tehran and Athens.