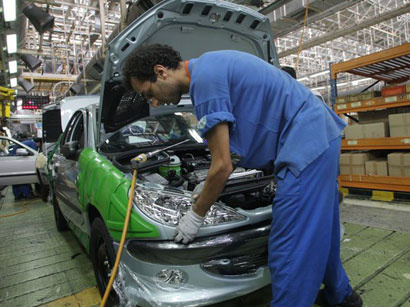 Oman has made a request for Iran Khodro to produce cars in the Arab country and the carmaker has welcomed that.

The proposal was made during Yekke-Zare’s meeting with Chief Executive Officer of Oman Investment Fund Hassan Ahmed al-Nabhani in Tehran, it added.

“If the plan proves to be economically viable and necessary investment is made, Iran Khodro would like to establish a production site in Oman and supply regional markets,” he said.

The plan is for semi-knocked-down (SKD) production of 20,000 cars, with 5,000 units intended for Oman and the remaining 15,000 for neighboring markets in Yemen, Sudan, Ethiopia, Eritrea and elsewhere, Yekke-Zare said.

“Iran Khodro would provide all engineering services and technology and instead expect financing by Oman,” he said.

The automaker, the Middle East’s biggest vehicle manufacture, is already producing 15,000 cars per year in Iraq.

Automotive industry is the second most active in Iran after oil and gas. The country has developed its domestic car industry for five decades.

It produced 1.6 million vehicles in 2011, about half of them by Iran Khodro, before sanctions were intensified by the West.

The company has been producing French branded cars, with the Samand sedan having a ubiquitous presence not only on the streets in Iran but those in Iraq, Syria and Azerbaijan.

The automaker used to supply 30 markets, with production lines set up in a variety of places in Venezuela, Belarus, Senegal, Azerbaijan and Syria.

The company, along with Saipa, dominates Iran’s massive market of about 80 million.