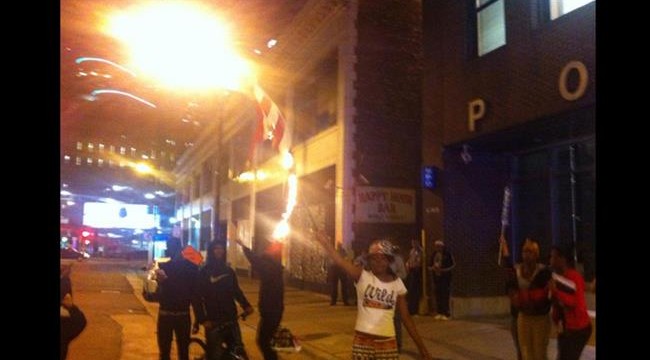 A group of demonstrators in the United States have burnt the country’s flag in protest to the acquittal of a white police over the killing of an unarmed black teenager.

About 100 activists gathered in downtown Minneapolis on Wednesday night and closed down two blocks before marching to Hennepin County Government Center.

They came to the streets one day after Dane County District Attorney Ismael Ozanne said he would not file charges against police officer Matt Kenny over the shooting death of Tony Robinson in Madison, Wisconsin on March 6.

The protest in Minneapolis was organized by the Black Liberation Project, said member Vanessa Taylor.

The protesters held a banner reading “Solidarity” and chanted their sympathy for Robinson. They chanted, “No Justice, No Peace,” and “Black Lives Matter.”

About 100 activists gathered in downtown Minneapolis.

A little boy was maced by police at a protest in Minneapolis.

A group of protesters burned a US flag in Minneapolis.

In a statement on Wednesday, the Minneapolis Police Department Chief Janeé Harteau pledged to open a full investigation “into the concerns brought forth this evening.”

“Our investigation will include gathering surveillance video and interviewing witnesses. I understand and appreciate people’s concerns and will gather the full set of facts as quickly as possible. I assure everyone this will be a thorough investigation,” Harteau said.

Meanwhile, people in Madison planned to walk out of jobs, schools and businesses on Wednesday.

Hundreds of people had signed up on Facebook to attend a protest and walkout organized by the Young, Gifted and Black Coalition.

“It is time to move into spring and grow by demonstrating resistance and resilience against the assault on black people in Madison and across the country,” the group said in a statement.

There is a national debate over police violence in the United States amid a string of police killings of unarmed black people, creating the Black Lives Matter movement.

People took to the streets in the city of Baltimore after 25-year-old black man Freddie Gray died from a spinal injury he sustained while in police custody.

The shooting death of Robinson has drawn comparisons to the fatal shooting of 18-year-old Michael Brown, another unarmed black, in Ferguson, Missouri, last year.

Police brutality as well as the racial profiling of minorities by US law enforcement agencies has become a major concern in the United States.

Minneapolis, racial discrimination in US, US May 14, 2015
Iran’s Larijani calls for continued efforts for eradicating terrorism
Saudi Arabia promises to match Iran in nuclear capability