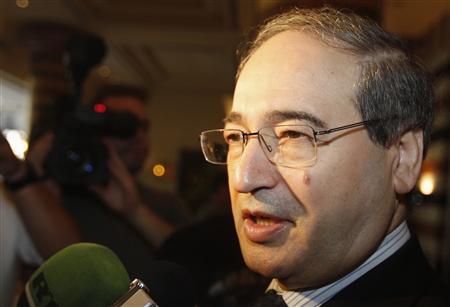 Syrian official lashes out over US training of rebels

The remarks by Faisal Mekdad were published Saturday in his weekly column for the Lebanon-based Al-Binaa newspaper.

U.S. officials say the program is part of a broader effort to build a force capable of fighting Islamic State extremists – not President Bashar Assad’s forces. Officials said Thursday the training started in Jordan with about 90 rebels. The program will expand to training sites in Turkey, Saudi Arabia and Qatar, with 400 fighters completing the prescreening process.

Mekdad said Washington is better off helping those who are fighting terrorism, instead of cooperating with what he said were terrorists. His government refers to all armed opposition as “terrorists” and accuses Turkey and Saudi Arabia of aiding them to undermine Assad.

Many among the rebels have also criticized the program, calling it a drop in the ocean that would not change realities on the ground.

Syrian rebels have been pleading for international help – particularly weapons – ever since the uprising against Assad’s rule that began in 2011 devolved into an outright civil war. Moderate rebels have long said that the West’s failure to bolster their forces helped fuel the rise of militants like the Islamic State group.

Assad’s forces, backed by Shiite fighters from Lebanon’s Hezbollah and by funding and arms from Iran, have suffered significant recent losses in the south and north. Assad vowed recently to make a push to regain lost territories.

On Saturday, Syrian TV said five civilians were killed when rebels shelled a government-controlled district in the disputed northern city of Aleppo.