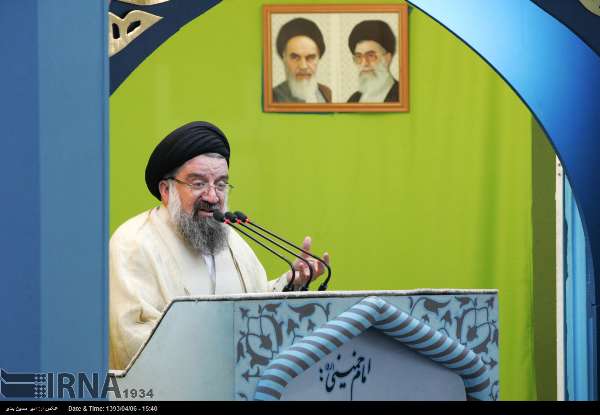 Iran daily: Supreme Leader to nuclear negotiators — be tough with US

Iran’s Friday Prayer leaders put out a firm message from the Supreme Leader yesterday, warning nuclear negotiators to be firm with the US in the discussions seeking a comprehensive agreement by June 30.

The prayer leaders speak according to guidance from a committee overseen by Ayatollah Khamenei’s office. In this case, however, they were following the Supreme Leader’s own presentation on Wednesday: “US need for the talks — if not more — is not less than Iran’s. Negotiators should observe red lines and tolerate no burden, humiliation, and threat.”

The platform for Khamenei’s warning was laid by US officials, including Secretary of State John Kerry and Defense Secretary Ashton Carter: they have repeated amid the past month’s nuclear discussions that Washington is keeping all military options “on the table” if diplomacy fails with Iran.

The Supreme Leader asked on Wednesday, “What does negotiation mean under ghost of a threat?”

See Iran Daily, May 6: Supreme Leader to US “How Dare You Threaten Us Militarily?”

In Tehran on Friday, Ayatollah Ahmad Khatami declared that Iran’s negotiators should not accept talks under that “ghost threat”. He then turned his warning on the US: “If you would like to once again try your luck, the Iranian nation will teach you quite a lesson to cause you never-ending regret.”

In Mashhad, Ayatollah Alamalhoda echoed the need for vigilance against a devious US, “We have to understand our enemy.”

Neither Supreme Leader nor the Friday Prayer clerics applied their declarations to the specific of the nuclear talks, in which Iran and the 5+1 Powers (US, Britain, France, Germany, Russia, and China) are drafting the text of a comprehensive agreement. The political discussions adjourned in New York on Tuesday, with technical experts continuing until Thursday, and resume in Vienna on May 12.

The leading issue for resolution is the timing of the removal or suspension of UN, European Union, and US sanctions, linked to provisions to limit and inspect Iran’s nuclear facilities and uranium enrichment.

Earlier this week, both Foreign Minister Mohammad Javad Zarif and Iran’s lead negotiator, Deputy Foreign Minister Abbas Araqchi, said drafting had advanced in 200 hours of discussions but that the text would have many “brackets” that would have to be filled in the political negotiations.