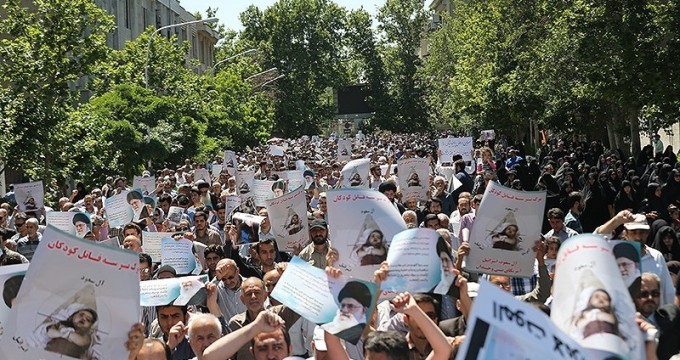 The Iranian capital, Tehran, as well as other parts of the country witness demonstrations in condemnation of the Saudi aggression against Yemen.

The demonstrators took to the streets after the Friday prayers.

Protesters chanted slogans against Saudi Arabia. They also held the United States responsible for the military aggression, which has claimed the lives of over 1,200.

The rallies in the capital featured people taking to the streets in droves to show support for the people of Yemen, condemning the interference and aggression blighting the Arab Peninsula country.

Some protesters were holding up placards bearing in Arabic, the slogan, “I am Yemeni.”

Riyadh launched its military aggression against neighboring Yemen on March 26 – without a United Nations mandate – in a bid to undermine the Arab country’s popular committees backed by the Ansarullah movement and to restore power to Yemen’s fugitive former president, Abd Rabbuh Mansur Hadi, who is a staunch ally of Saudis.

On Thursday, the UN Humanitarian Coordinator in Yemen voiced grave concern over the deteriorating situation in Yemen and said “attacks on hospitals and other civilian infrastructure must stop immediately.”

The protests across Iran came a day after, during a joint press conference with US Secretary of State John Kerry, Saudi Foreign Minister Adel al-Jubeir accused Iran of meddling in regional countries, including Yemen.

Also on Friday, Iranian Foreign Ministry Spokeswoman Marzieh Afkham dismissed the allegation, saying, “These remarks are a blame game, based on a string of repetitious and useless analyses.”