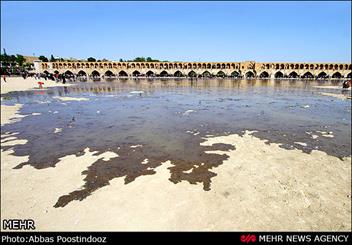 The empty river of life

TEHRAN — Every day, when I walk to our supermarket in the western part of Tehran to buy the groceries my wife tells me to get, I pass a long row of plane trees, neatly planted decades ago according to the design of ambitious city planners.

Last week, three of the hardy trees had been cut down, and just the other day three more had disappeared. I asked a parking attendant hired by the nearby health club to manage the ever-increasing traffic where the trees had gone.

“All dead,” he answered, shrugging. “Completely dried up. The city came and cut them down. They were a hazard, you know.”

Recently, during one of Tehran’s spring storms, a broken branch had nearly fallen on his head, he told me.

There have not been that many storms in Tehran, Iran’s sprawling metropolis, which stretches from the mighty Alborz mountain range in the north far into the dry plains to the south, toward the holy Shiite city of Qum. Actually, there has not been much rain here for years.

Signs of the drought in Iran — which, according to experts, has lasted for more than two decades — are not very visible in the capital. There are many parks and trees because of the active city government.

But make no mistake: The city is dry. Its underground water supplies are depleted, and officials have long warned that, one day, the trees will dry up and water might need to be rationed.

Outside Tehran the situation is much worse, and some experts predict that the south will become uninhabitable if the drought persists.

Still, to the dismay of those aware of Iran’s water problems, many in Tehran keep washing their cars with water from wells that they somehow believe will fill up miraculously — even though average rainfall has dropped and the city’s population has tripled in the past 30 years.

“The well is endless. The water comes from deep inside the earth,” my neighbor assured me after I asked if it was really necessary to “wash the street,” as he calls drowning the asphalt in gallons of water to clean the dust. “God has given us this water to use,” he said.

Nowhere is the drought more visible than in Iran’s former capital, Isfahan, a desert city 250 miles south of here. It is home to a once mighty river, the Zayanderud, or the River of Life, that cuts through the historic center like a clumsily rolled out carpet.