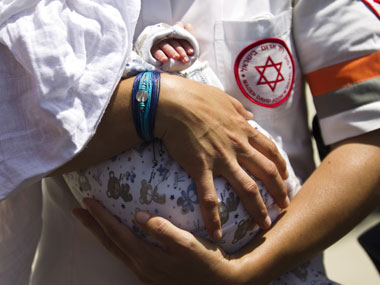 Rescuing babies and ignoring surrogates in Nepal: Israel’s callousness is a global shame

One thing a disaster like an earthquake can bring out is our sense of shared humanity – from a sand sculpture in Puri to a candlelight vigil in South China. India’s swift and expansive response was like extending a “blank cheque” said a grateful Nepal.

The picture of the week according to Israeli media was one in which “a newborn baby, wrapped in a woolen blanket and in a piece of blue-and-white cloth, snuggles in the strong arms of an Israel Defense Forces soldier in a pressed uniform.”

But don’t for a moment be fooled into thinking it means “We are all Nepali” now. That heart-warming Israeli picture does not tell the full story.

The Israel government has just made it clear that all this “shared humanity” stops at the aircraft door.

Debra Kamin reports for Time  that an Israeli Boeing 747 flew back to Ben Gurion International Airport carrying 15 Israeli babies all born to surrogate mothers in Nepal.

None of the surrogate mothers were allowed to travel.

Their womb-for-hire contract has no natural disaster exceptions.

The Israeli government said the ones most heavily pregnant would be allowed to fly to Israel to give birth and they would work to cut through complications with Indian law when it comes to severing the legal connection between the surrogate mother and child.

The ones not so heavily pregnant will have to wait and see if the government can modify immigration procedures to allow them to come to Israel to give birth. The ones who had already delivered were just plain out of luck.

There’s nothing wrong with surrogacy but the earthquake has accidentally exposed what it means when you treat a human being as an organ, a business entity, a commodity.

It’s easy to deprive them of their humanity as Israel has so blithely done. Once the babies are delivered, the surrogates’ purpose is served. The government has no legal obligation. And governments rarely understand moral obligations that do not suit their end.

The story also underscores once again the other Nepal, the one that exists beyond the picture postcard façade we all know and love.

It’s the reality of a poor country, which makes it a destination not just for admiring tourists but also those from wealthier nations shopping for a surrogacy deal. Time says the same surrogacy that costs $150,000 in the USA or Canada costs $30,000 in Nepal. $30,000 is a lot of money in South Asia but when push comes to quake, all the money cannot buy you room on that Boeing 747.

To add to the complexity of it all, many of the prospective Israeli parents are gay. Israel does not allow same-sex couples to enter into a surrogacy agreement with an Israeli woman in Israel forcing them to look outside its borders.

Many of them used to go for surrogacy in India until the Indian government decided to prevent gay men from engaging surrogate mothers. According to Haaretz Nepal permits the procedure as long as the surrogate mother is not Nepalese.

That’s why many of the surrogate mothers in Nepal are actually Indian. It all seemed like a perfect market-driven globalized solution for a knotty social problem until a 7.9 earthquake cracks open the legal complications within it.

NPR tells the story of one such couple – Gilad Greengold and his husband Amir Vogel Greengold.

It might take a village to raise a child but it takes continents to create a surrogate baby. The sperm came from Israel. It was frozen in Thailand. The egg donor from South Africa. The embryo traveled to Nepal where an Indian woman was the surrogate mother. Nine months later as the Greengolds were headed to a Kathmandu hospital where the mother had given birth, the earthquake struck.

Gilad Greengold describes their miracle baby and how they stayed in a parking lot for four days, huddled in a car with the heat turned on, with other Israeli parents, until the Israeli government organized the rescue.

“I don’t think any other country in the world would do what they did for their citizens stuck in Nepal,” says a grateful Greengold. “We are very thankful and it’s very important to say that.”

“Their citizens” is the key phrase. Somewhere in the middle of this story was an Indian woman who had just given birth, also stuck in a disaster zone. Greengold says they gave her chocolate but the language barrier made it impossible to communicate with her.

Social activist Alon-Lee Green writes in the Israeli newspaper Haaretz  that he’s deeply disturbed that all those touching human-interest stories about Israeli fathers stuck in Nepal with their new babies and photographs of joyful reunions at the Ben Gurion airport in his country’s media do not mention the plight of the women who carried these babies.

While supporting the right of gays to have children and build families, Green writes “without much deep or serious thought and almost without noticing, we have allowed capitalism to expand to include the bodies of numerous disadvantaged women.”

The women who rent their wombs become just another commodity to be bought on the open market.

Aeyal Gross writes in Haaretz that it is “absurd” that it might take a massive earthquake in Nepal to force Israeli laws to become more fair and non-discriminatory when it comes to surrogacy in Israel.

“Surrogacy agreements require strict oversight to protect all those involved, particularly the surrogate,” writes Gross and “(a)ll of the parties involved – the intended parents, the surrogacy agencies and the Israeli government – all have responsibility for ensuring this.”

Surrogacy is a reality in the modern world. Agencies have fulfilled a market need and devised an efficient way to do it, figuring out loopholes in contradictory laws across countries. But it has taken an earthquake to remind us that what appeared to be a cut-and-dried business contract is actually about human lives not some outsourced BPO.

One day when the Greengolds tell their little Yaari about how he was born in the middle of a terrible earthquake, it will be a unique and thrilling story. But will they remember the Indian woman who brought him to the world and wonder if she made it back home safely?