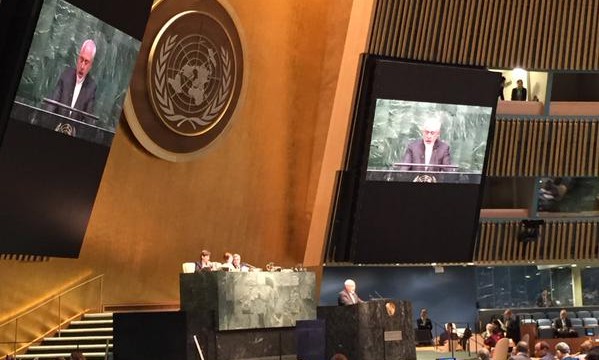 Iran has demanded that Israel give up its “nuclear weapons”, as it spoke on behalf of the 120-nation Non-Aligned Movement. Iran’s Foreign Minister, Mohammad Javad Zarif said the bloc also wants a nuclear free-zone in the Middle East.

Mohammad Javad Zarif was speaking at the United Nations for the non-aligned group of countries. Israel has never admitted or denied the widespread assumption it has nuclear weapons. However, Zarif says Israel’s assumed nuclear arsenal was a threat to regional security.

The Iranian Foreign Minister said the non-aligned movement regards Israel’s nuclear program as, “a serious and continuing threat to the security of neighboring and other states, and condemned Israel for continuing to develop and stockpile nuclear arsenals,” according to Reuters.

The plan to create a nuclear free Middle East was agreed at the previous conference in 2010, but steps were never taken to ensure it was enforced.Iran has been accused on numerous occasions by the West of trying to develop a nuclear weapon, a charge that Tehran has repeatedly denied. The country says its nuclear program is purely for peaceful purposes. Iran recently agreed on a framework deal concerning its nuclear interests with the P5+1 group in Switzerland, which would pave the way for it to be finalized in the summer.However, Israel was highly critical of the move. Prime Minister Benjamin Netanyahu stated that it “would not block Iran’s path to the bomb. It would pave it.”During the conference, Tehran also demanded that countries who possessed nuclear weapons should not seek to modernize their weapons stockpiles.

“We call upon the nuclear-weapon states to immediately cease their plans to further invest in modernizing and extending the life span of their nuclear weapons and related facilities,” Zarif said. The head of the UN, Ban Ki-moon singled out the US and Russia for criticism for failing to advance their nuclear disarmament. He added this was a setback that marked a return to a Cold War mindset. He added that a nuclear free world was a “historic imperative of our time.”

“I am deeply concerned that over the last five years this process seems to have stalled,” the UN leader said, AFP reported.

In an apparent attempt to deflect criticism, US Secretary of State John Kerry said that the United States wants to “leave the race for nuclear arms in the past.”

“I am pleased to announce today that President Obama has decided that the United States will seek to accelerate the dismantling of retired nuclear warheads by 20 percent,” Kerry said.

Meanwhile Russia is fully open to a serious dialogue on nuclear disarmament, but it must be without any “double standards,” said the head of the Russian Foreign Ministry’s Department for Nuclear Non-Proliferation and Weapons Control, Mikhail Ulyanov.

“[Russia] is firmly committed to nuclear disarmament,” he said. “Clear evidence of that is the consistent implementation of the Russian-American New START treaty.”

The NPT came into force in 1970 and has seen a drastic cut in the number of nuclear weapons. However, UN officials believe that more can be done to reduce these stockpiles further.