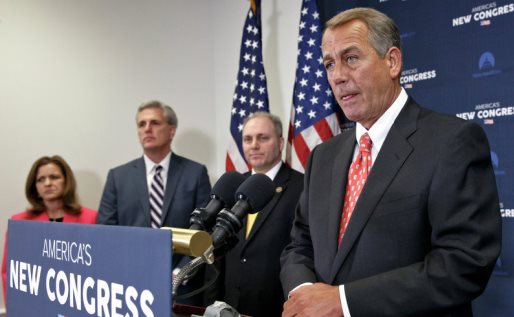 Boehner admits Congress does not have enough votes to stop Iran deal: Report

US House of Representatives Speaker John Boehner has privately acknowledged that Congress does not have enough power to block a possible nuclear deal between Iran and world powers, a report says.

Speaking at an off-the-record event at the Republican Jewish Coalition’s meeting in Las Vegas Saturday, Boehner said the Republican Party does not have enough votes to overcome a veto of any resolution against a deal President Barack Obama is working to reach with Iran over its nuclear program, Bloomberg View reported.

According to the report, the top ranking Republican said he did not expect that more than two-thirds of Congress would vote to overturn a veto from Obama if Congress voted against a possible deal between Tehran and the P5+1 group — the US, Britain, France, China, Russia and Germany.

A spokesman for Boehner, Michael Steel, confirmed the report and said, “Obviously, it takes only a fraction of the House and Senate Democrats to sustain a veto.”

“But it is impossible to say whether they will or not until we know what the final ‘deal’ looks like,” he added.

One official, who was present at the meeting, told Bloomberg View that “it seems like Congress can’t do anything to stop Obama’s Iran deal.”

There were three other officials, who attended the event and expressed similar views, saying they were disappointed at the speaker’s anticipation, the report added.

The resolution of disapproval against Iran deal is known as the Iran Nuclear Agreement Review Act.

On April 2, Iran and the P5+1 reached a framework agreement over Tehran’s nuclear energy program. The two sides face a deadline of June 30 to finalize a comprehensive deal.