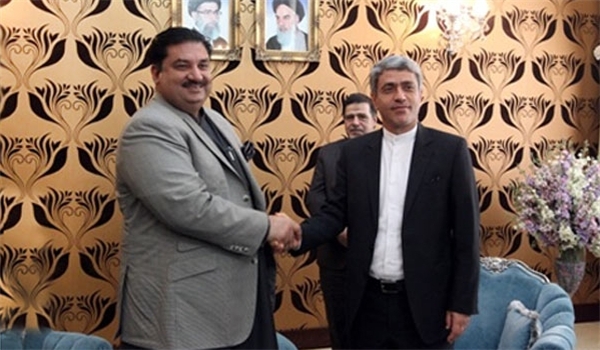 In a meeting with the Pakistani minister in Tehran, Tayyebnia expressed the hope that effective steps would soon be taken to implement the agreements reached by the Iran-Pakistan joint economic commission.

He underscored the role of border trade in boosting mutual commerce, adding that Iran has ‘no limitations’ when it comes to expanding economic relations with the neighboring country.

The Iranian minister also expressed Tehran’s preparedness to invest in areas of technical and engineering services and other business activities in Pakistan.

The Pakistani commerce minister, for his part, suggested that the two counties’ finance ministries draft the mechanisms and strategies for facilitating bilateral trade.

Iran and Pakistan have exchanged delegations on a regular basis in the last several decades and the two Muslim neighboring nations are keen to expedite expansion of their bilateral ties, specially in the energy sector.

Also In December, Dastgir Khan called for the further expansion of trade relations with Iran.

“Islamabad is determined to have sustainable trade relations with Iran,” Dastgir Khan told FNA after his meeting with the Iranian minister of economy.

He noted that Pakistan is even ready to change some of its trade regulations in a bid to facilitate imports and exports between the two countries.

“We have reached an agreement with the Iranian economy minister in a bid to remove all obstacles hindering trade and economic cooperation between Pakistan and Iran; this might take some time, but Tehran and Islamabad are determined to do so,” Dastgir Khan added.