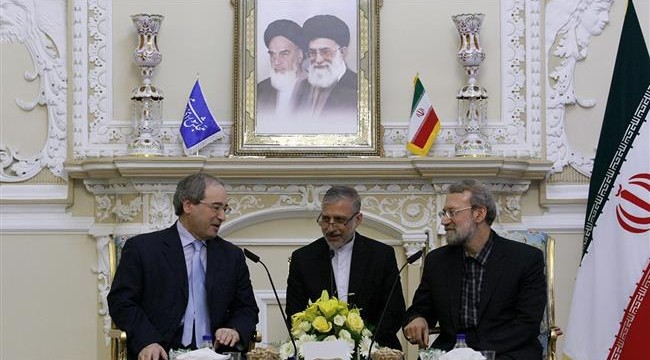 The Iranian Parliament (Majlis) speaker says Syria is paying the price for its resistance against the Israeli regime.

“Syria is a significant country in the resistance front and in restoring the rights of the oppressed Palestinian people, and it is paying the price for resistance against the Zionist regime,” Ali Larijani said in a meeting with Syrian Deputy Foreign Minister Faisal al-Miqdad in Tehran on Thursday.

Larijani added that opponents of the Syrian government have come to realize that they need to respect the demands of the nation, which, he said, has stood up to big powers.

The top parliamentarian called on the friend countries of Syria to play a more active role in the campaign to resolve the crisis in the Arab country and hold consultations to contribute to the establishment of peace and stability in Syria.

Warning against the fallout from the ongoing tension in Yemen and Syria, Larijani said such conflicts could harm the entire Islamic world, and called on certain regional countries to refrain from acting as a tool to fulfill the demands of Israel as well as those of global powers.

The Syrian official, for his part, thanked Iran over its support for the Syrian government and nation and said the Islamic Republic has backed stability in his country since the beginning of the crisis nearly four years ago.

He said that Syria will continue resistance to safeguard the country’s solidarity and territorial integrity, adding that the region could benefit from peace in Syria.

Over 7.2 million people have been internally displaced, and more than 3 million fled the country, according to the United Nations High Commissioner for Refugees (UNHCR).