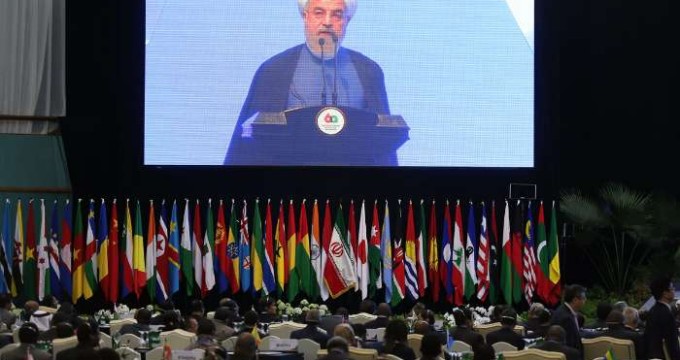 The following is the full text of President Rouhani’s speech at the opening session of the Summit Meeting of the Asian-African Conference in Indonesia:

‘At the outset, I would like to express my pleasure for participating in the Asian-African Summit Conference in the brotherly and friendly country of Indonesia and appreciate the hospitality of the honorable president, the government and people of this beautiful country.

‘The commemoration of the sixtieth anniversary of the historical Bandung Conference, which coincides with the tenth anniversary of the new Asian-African Strategic Partnership, is indeed a unique opportunity to pay homage to the founders of this valuable initiative-an initiative which prospered within the framework of the Non-Aligned Movement and resulted in the voices of South Countries to be heard at international level and in improvement of their role as an influential force in establishing international peace, security and development, and for the first time, the fight against colonialism and racism was clearly inscribed on the agenda of the international community.

‘Terrorism and extremism are now widespread in many parts of Asia and Africa. Extremist terrorists, particularly in Iraq and Syria and some African countries, resort to the most barbaric methods to kill innocent women, men and children on a daily basis for their own vicious and anti-human political interest and to destroy the infrastructure of these countries. Extremists enjoy the intelligence, logistic and financial support of some regional and international players to achieve their illegitimate goals; this is while, their sponsors ignore the fact that the continuation of instability in the crisis-hit areas will bring insecurity throughout the whole world including their own countries.

‘When two years ago I noted the flares of extremism, violence and terrorism spreading in the world and especially the ancient continent of Asia and Africa, I moved in the 2013 General Assembly of the United Nations, to adopt the resolution on the World Against Violence and Extremism (WAVE) and create an international structure with your support to achieve this objective.

Under such circumstances where the global conscience is extremely bruised by the indifference of international organizations towards the expansion of terrorism, it is now time to introduce a plan for a Global Action Against Violence and Extremism (GAVE) with the aim of uprooting terrorism prudently rather than intensifying it through inappropriate actions of certain countries. We believe the combat against terrorism should be put on the agenda of this summit conference and be considered in line with the principles and values of Bandung. I take the opportunity of this historic gathering, which represents the majority of the world population, to propose the underlying principles for a Global Action Against Violence and Extremism (GAVE):

‘1- The fundamental concept in the combat against terrorism is to respect the right to life. We should reach a point in which individual life from any faith, religion, ethnicity or race are considered and treated equal so that peace of mind permeates in the globe; We should reach a point in which there is no difference between a Muslim, Christian, Jew or Buddhist or an African, Asian or European, so as to prevent terrorism from threatening and disrupting human peace and individual and collective security.

‘2- The biggest betrayal to the divine religions is to misuse them to justify murder and killing. A global and extensive action should be initiated by the religious and cultural leaders of the world to fight with justification for murder and homicide on ideological grounds. No religious zeal should be used for political domineering, particularly, the beautiful divine religion of Islam, which has brought the message of mercy and compassion for the world.

‘3- Parallel to fighting extremism and terrorism, we should identify the reasons our youth are attracted to terrorist groups and stop their recruitment. The cultural and economic roots of radicalism and desire for violence should be also identified. We should take honest measures to resolve economic problems, promote social justice and prevent the promotion of culture of violence and thereby preclude the terrorist from exploiting the situation.

‘4- In addition, financial, political and intelligence channels of support for terrorists should stop. Until some governments pursue the concept of good and bad terrorists, international terrorism would not receive the world’s decisive message of the fight against terrorism and will continue its survival every day under another name and with the support of another state.

Continued crises and conflicts which have been intensified with foreign military intervention have created humanitarian catastrophe in the crisis-hit areas.

‘The present unfortunate conditions in Yemen and Syria are clear examples of this situation. History has demonstrated that military intervention is not a proper response to these crises and will instead exacerbate the situation. We believe that sustainable peace can prevail if military intervention is ceased and proper conditions are prepared for talks and dialogue among all political groups. We remind the international community of its grave responsibility in this respect.

‘Along the same line, the policy of occupation and expansion undertaken by the aggressive Zionist regime, executed through physical and structural violence, has led to systematic and massive violation of the rights of Palestinians. This constitutes a serious threat to regional and international peace and security.

‘Meanwhile, in spite of continued international condemnation, the Zionist regime, relying on the full support by the big powers, continues with its inhumane policies against Palestinians and Palestine as well as other territories.

‘History shows that conflict and insecurity creates poverty and underdevelopment. This is an important challenge facing the developing and the least developed countries. In spite of national efforts to alleviate and eradicate poverty, development cooperation has yet to achieve the desired level of economic development in the poor countries.

‘Moreover, the developed countries have either failed to fulfill or conditionalized their international commitments in the areas of financing and technology transfer. The international economic and financial architecture also suffers from structural weaknesses. This has prevented effective participation of the developing countries in the major decision making processes of these organizations.

‘We still are far from a multilateral, rule-based, non-discriminatory and inclusive financial and trade system, in favor of assisting increased investment, development and sustainable employment in developing and the least developed countries. Therefore, structural reforms in this system are quite necessary. Non-discriminatory participation of all countries in international and regional financial and banking institutions and processes is an indispensible part of this structural reform.

Multilateralism is another Bandung Conference principle which is also a significant human achievement in the fight against arrogant unilateralism. Resort to coercive measures such as the imposition of economic sanctions against independent states is a manifestation of such an attitude. The illegal and unjust sanctions against the peaceful nuclear program of the Islamic Republic of Iran are a prime example of this dangerous approach.

‘However, the resistance and endurance of the Iranian nation as well as the rapid growth and development of this domestic technology in Iran ultimately persuaded the other party to come to the negotiating table; and the 5+1 countries understood that threats, humiliation and sanction cannot create peace and security. Complex and lengthy negotiations are under way which I am glad to say is on the constructive track which could lead to a final solution. The final agreement should ensure Iran’s right to use nuclear energy for peaceful purposes and also secure the lifting of all economic sanctions. I announce here that our foreign policy is based on constructive engagement; and I emphasize that such constructive engagement is to the benefit of all of us involved and to the benefit of other peoples of the world.

‘The world has clearly understood that the Islamic Republic of Iran, pursuing the settlement of the nuclear issue as the first step, is firm to utilize, more than before, all its efforts and regional and international capacities, in the next step, to promote peace and security in the region and beyond.

‘Inspired by the principles of Bandung Conference and Islamic precepts, we will try, at this stage, to promote regional cooperation and interactions among neighbors in order to strengthen peace, tranquility and stability as prelude to economic development and eradication of poverty and underdevelopment.

‘Under such a framework, the Islamic Republic of Iran is prepared to strike partnership with its neighbors including its Arab neighbors. In this respect, we emphasize on the establishment of regional peace to stop killing and bloodshed in Yemen and other countries of the region, as in the new international order, cooperation and partnership are fundamental.

As the Chair of the Non-Aligned Movement, I have the privilege and the honor to say how satisfying it is to be present in this summit meeting. This Movement, as the biggest diplomatic achievement of recent decades, believes that the strong foundation of this strategic partnership led to the strengthening of Asian African countries and other developing areas in many fields and enabled them to play a more important role at international level. Considering the current conditions of the world politics, it is now our duty to realize the Bandung principles in action. On such a basis, we need to accelerate and strengthen the link and cohesion between Asia and Africa.