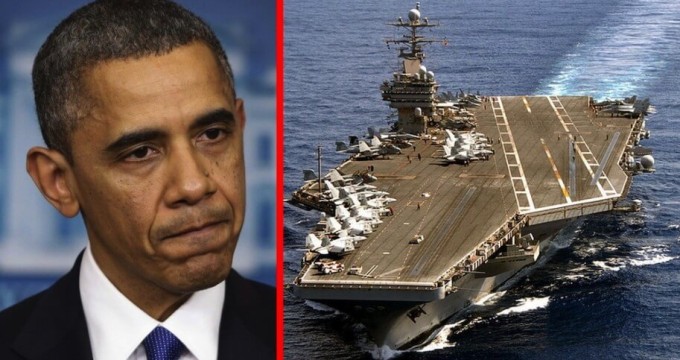 A number of media outlets, including Fox News, are reporting that tensions in the Middle East have abruptly escalated with word that the aircraft carrier USS Theodore Roosevelt has just been dispatched to the waters off Yemen. According to a developing story on the Fox News website, the warship nicknamed The Big Stick “will join other American ships prepared to intercept any Iranian vessels carrying weapons to the Houthis fighting in Yemen.”

Even as the Obama administration continues to push for a negotiated agreement with Iran that would supposedly restrict the country’s development of nuclear weapons, a potential confrontation with Iran could be on the horizon. The Iranian regime has reportedly arranged for weapons to be shipped to rebels fighting to gain control of Yemen — Houthi rebels whose hostile actions are strongly opposed by the United States. The U.S. has been supporting a Saudi-led bombing campaign that’s targeted the Houthi rebels since late last month.

The U.S. Navy has been beefing up its presence in the Gulf of Aden and the southern Arabian Sea amid reports that a convoy of Iranian ships may be headed toward Yemen to arm the Houthis.

The Houthis are battling government-backed fighters in an effort to take control of the country.
Once hailed by President Obama as a success story in the West’s effort to combat terrorism, Yemen in recent months has collapsed into chaos. And now, with the reported building of U.S. military might off the coast of the war-torn nation, some fear that chaos could evolve into a conflict threatening to de-stabilize the entire region.

The BBC reports that the leader of Yemen’s Houthi rebels just gave a televised speech in which he condemned the Saudi Air Force for bombings that have supposedly killed numerous civilians. The rebel leader also praised Iran as a “great Islamic country.”

The Hill noted several days ago that U.S. military officials have been expressing concern that Iran’s apparent entry into the Yemeni civil war could spark a regional sectarian conflict. The Iranian ships loaded with weapons intended for rebel forces was a provocative move of particular concern to the Pentagon.

“Officials fear the move could lead to a showdown with the U.S. or other members of a Saudi-led coalition, which is enforcing a naval blockade of Yemen and is conducting its fourth week of airstrikes against the Houthis.”

As CNN reports, the Senate could soon vote on a bipartisan measure to give Congress far more oversight concerning Presient Obama’s emerging nuclear deal with iran. This development regarding the Iran-induced tensions in and around Yemen could certainly impact not only that vote but also the credibility of the Obama administration’s representations about Iran’s good faith efforts to promote peace in the Middle East.