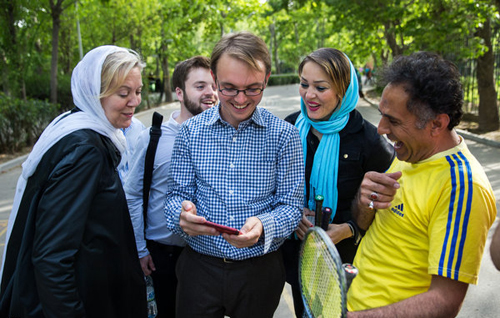 The Financial Times reported that a delegation of 22 US entrepreneurs, investors and consultants were in Tehran on Thursday and were briefed about the post-sanctions Iran business potentials.

They came as American “tourists” and were startled to receive hugs and even free gifts by people on the streets and in the bazaars of Iran.

But unlike most tour groups, this one comprised entrepreneurs, consultants and investors from the US who had travelled to explore the business opportunities available in Iran if international sanctions over the nuclear program are lifted.

On Thursday, the group gathered at Prive, an upmarket French restaurant in north Tehran, to hear western-educated Iranian entrepreneurs give slick presentations about how a new, investor-friendly Iran was emerging. It was the first time since the 1979 Islamic Revolution that US businesspeople had held a public meeting in the country.

American businesspeople met with Iranians last week at a restaurant in north Tehran.

Investors from around the world have been quietly beating a path to Iran to develop business contacts in anticipation of the removal of sanctions in the event of a nuclear deal at the end of June. But Iranians are particularly excited at the prospect of access to US companies and products.

Senior US business delegations – from aviation companies to oil groups and food conglomerates – are rumored to have been discreetly travelling to Iran or holding meetings with Iranian businessmen in regional or European countries over the past year in preparation for the day that business with one of the world’s most untapped markets is authorized.

But the group of 22 US entrepreneurs, investors and consultants that attended Thursday’s meeting was the first to travel openly to Iran.

“I am an entrepreneur in the New York Stock Exchange … but not planning to do business in Iran,” said Linda Mason, chair of Bright Horizons, a leading provider of worksite childcare operating in 45 US states and Europe. “It is more to be a communicator, as American business people are always looking for new markets and are open for risks.”

At Thursday’s event, Iranian guest speakers gave presentations of the opportunities available in their country, while a deputy from the ministry of information and technology described the potential of Iran’s telecoms sector. But despite the optimism, the pitfalls for Americans doing business in Iran were never far away. The “tourists” were forced to meet at a restaurant to avoid the security checks needed for an official business conference that could have been scuppered by hardliners, particularly as the group were nationals of a country Iran has long dubbed its arch-enemy.

Even the soundtrack in the restaurant had reminders of the polarization in the country. One of the songs played was Happy by Pharrell Williams, which gained notoriety in Iran last year when a video of Iranian teenagers dancing to the song prompted a conservative crackdown and saw the dancers arrested for violating strict edicts banning men and women from dancing together.

Still, Iranian enthusiasm for doing business with Americans was infectious. “We are going to speak about what we saw to help [Barack] Obama [strike a nuclear deal],” said Ned Lamont, a 2006 Democratic candidate for the Senate, representing Lamont Digital Systems.

Whether this will overcome the suspicion of conservatives in Washington and Tehran remains to be seen, however. “American businessmen will have to wait until the next US presidential election [2016],” said a senior western diplomat in Tehran. “They will be the last ones coming, not the first.”