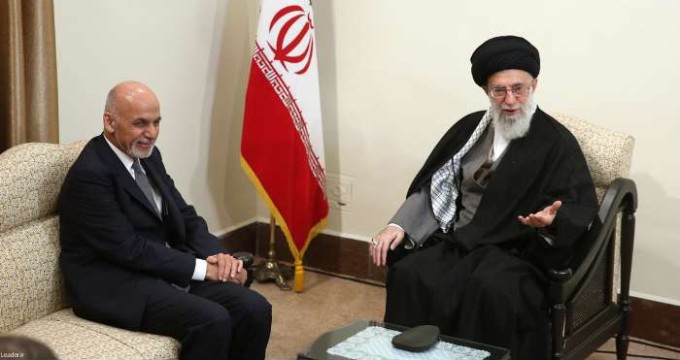 Tehran, April 19, IRNA – Supreme Leader of the Islamic Revolution Ayatollay Seyyed Ali Khamenei said on Sunday that the Islamic Republic of Iran regards the security and development of Afghanistan as its own.

The Supreme Leader made the remarks in a meeting with visiting Afghan President Mohammad Ashraf Ghani.

Referring to cultural, historical and religious affinities between Iran and Afghanistan, the Supreme Leader said Afghanistan is very rich in terms of culture, human and natural resources which all should be taken into account as privilages to develop economic cooperation.

There is no doubt that the US and some countries in the region have no knowledge about the capacities and capabilities of Afghanistan and are opposed to unanimity and cooperation between the two countries but Iran regards the security and economic development of Afghanistan as its own, said the Supreme Leader.

Existing issues between the two countries such as refugees, water, transport and security could be resolved but all should be paid due attention based on the defined timetable, said Ayatollah Khamenei.

On resolving the issue of Afghan refugees and continued studies of tens of thousands Afghan nationals in Iran, the Supreme Leader said the Afghan nation are very talented and their talent should be heeded as education is vital for the Afghans who minds to reconstruct their country.

Iran is the home for the Afghan brethern, said the Supreme Leader and expressed the hope to witness success and increase of capabilities of Afghan government and nation.

The Afghan President said for his part that he was pleased with his visit to Iran and wished Afghanistan to find its previous identity and play as bridge connecting countries in the region.

Afghanistan is determined to broaden relations and cooperation with Iran and is to spare no efforts to attain the goal, he said.

Existing problems between the two countries such as the issue of terrorism, drug trafficking, immigration and water in joint borders could be resolved as both sides have full determination to this end based on a timetable, said the Afghan president.

None of our neighbors suffer as much as Iran from drug trafficking in Afghanistan and no country has done its best as Iran did, he said.

‘We are determined to help Iran jointly fight with drug-trafficking,’ he said.

Referring to current level of cooperation in various fields such as transport, investment, cultural and economic interaction, he said the Islamic Republic of Iran under Your Excellency wise leadership has stabilized its historical status and we all hope to witness economic development and prosperity of the two nations.

President Hassan Rouhani was present in the meeting.