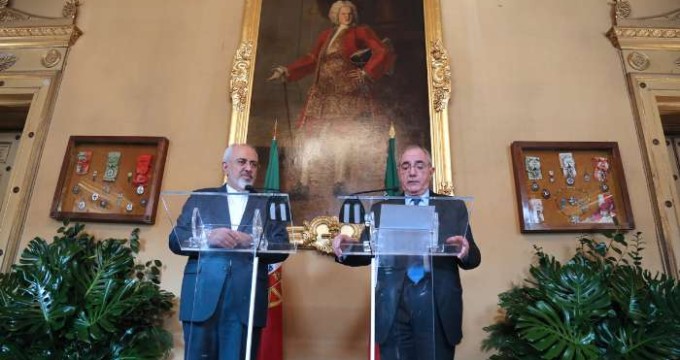 Zarif: Iran to continue its path to peaceful nuclear tech.

Foreign Minister Mohammad Javad Zarif expressed Iran’s readiness to further cooperation with Portugal in various fields of energy, tourism, academia, science and culture, adding “Tehran-Lisbon interactions must not be limited to bilateral relations only but should include multilateral and international issues such as fighting extremism and terrorism.”

Zarif also discussed the latest progress of Iran and 5+1 nuclear negotiations, noting that the Islamic Republic has always been moving toward obtaining peaceful nuclear technology and to achieve this, has never deviated from its path.

Portuguese Foreign Minister Rui Machete, for his part, deemed the current situation an ‘exceptional opportunity’ for opening a new chapter in the two countries’ bilateral and multilateral cooperation, adding the two countries could further cooperate in various fields such as transportation and establishing direct flights between Tehran and Lisbon.

During a press conference with the Portuguese FM in the Portuguese capital Lisbon on Wednesday, Zarif maintained President Barack Obama will be held ‘accountable’ for respecting a final agreement on Iran’s nuclear program.

“It is the obligation of the government of the United States to implement its international agreements. And we will hold the US government, the US president accountable,” Zarif said.

His comments followed a decision made in the US Senate, which would give the Republican-majority Congress a chance to review an agreement with Tehran.

Zarif departed for Spain on Tuesday where he met with Spanish Prime Minister Mariano Rajoy Brey to express Iran’s stance on various regional developments as well as discussing ways to boost cooperation between the two countries. He then left Madrid for Lisbon at the invitation of his Portuguese counterpart to further bilateral relations with the European country. He is also due in the Indonesian capital Jakarta next week.

The visits come just a few days after Iran and the 5+1 reached a preliminary understanding on Tehran’s nuclear policy drafted as a statement that was jointly released by Zarif and EU Foreign Policy Chief Federica Mogherini on April 2 in the Swiss city of Lausanne.