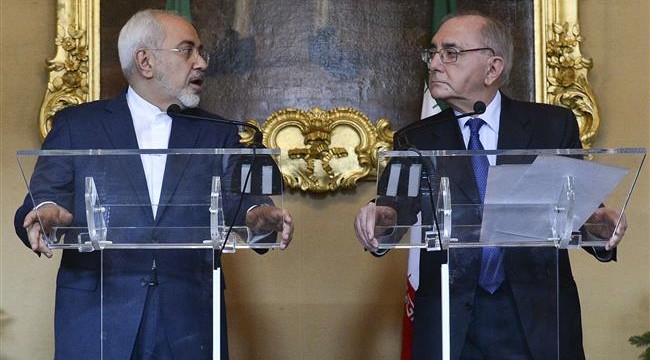 Zarif made the remarks at a press conference in the Portuguese capital Lisbon on Wednesday.

“It is the obligation of the government of the United States to implement its international agreements. And we will hold the US government, the US president accountable,” Zarif said.

His comments followed a decision made in the US Senate, which would give the Republican-weighted Congress a chance to review an agreement with Tehran.

White House spokesman Josh Earnest said on Tuesday that Obama was not “particularly thrilled” by a new proposal put together by the Senate Foreign Relations Committee, yet was “willing to sign the proposed compromise.”

The Obama administration has been engaged in efforts to prevent the pro-Israeli Congress from taking measures against a deal with Tehran.

Zarif noted that prior to a comprehensive agreement, Tehran would make sure if the bill “infringes upon or hinders the capability of the president to carry out the obligations that he is going to assume with Iran.”

Iran and the P5+1 group – the US, Britain, France, China, Russia and Germany – reached a landmark understanding over Tehran’s nuclear program in Switzerland on April 2. The two sides are set to start drafting a final accord slated to be finished by the end of June.

Further in his Wednesday remarks, the Iranian foreign minister said that Russia’s decision to fulfill its “obligation” regarding the sale of S-300 air defense missile systems to Tehran had nothing to do with the nuclear negotiations with the world powers and was “fully legal”.

“Russia is fulfilling its contractual treaty obligation to deliver the S-300 defense capabilities to Iran. It had nothing to do with the negotiations,” Zarif said during a joint news conference with his Portuguese counterpart Rui Machete.

A man takes a picture of the S-300 Russian surface-to-air missile system displayed on Suvorovskaya square in central Moscow on December 8, 2014. ©AFP

“I think it is the right decision that Russia has made, it is a contract that we have with Russia which is fully legal and will have no impact on the negotiations.”

Russian President Vladimir Putin signed a presidential decree on Monday, paving the way for the long-overdue delivery of the missile defense system to Iran.

Russian Foreign Minister Sergei Lavrov has also defended his country’s decision to provide Iran with the missile system, stressing that the move would not pose a threat to the security of any country in the Middle East.