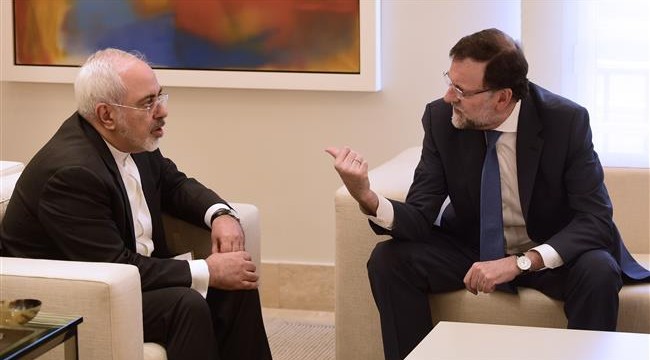 The Spanish prime minister has highlighted the mutual understanding reached between Iran and the P5+1 group on Tehran’s nuclear program, saying it was essential that the two sides achieve a comprehensive final deal by the end of June.

Mariano Rajoy made the remarks during a meeting with visiting Iranian Foreign Minister Mohammad Javad Zarif in Madrid on Tuesday.

Iran and the five permanent members of the United Nations Security Council – the US, Britain, France, Russia and China — plus Germany along with officials from the European Union reached a mutual understanding on Tehran’s nuclear program on April 2 after eight days of marathon talks in the Swiss city of Lausanne. The two sides will now work on drawing up a final accord by the June 30 deadline.

The Spanish premier also hailed Tehran-Madrid ties as excellent and stressed the need for further promotion of bilateral relations.

Zarif, for his part, called for the promotion of bilateral ties in all sectors. He also briefed the senior Spanish official on Iran’s stances on Yemen’s crisis, the ISIL terrorist group and terrorism.

Underlining the need for a political solution to the Yemeni conflict, Zarif said that the solution to the ongoing tension in the Arab country should include hammering out an immediate ceasefire, sending humanitarian assistance to the people affected by violence, launching national dialog and establishing an inclusive government.

Zarif also held separate talks with Spanish Parliament Speaker Jesus Posada and his counterpart Jose Manuel Garcia-Margallo, during which the diplomats called for further expansion of bilateral ties and exchanged views on the latest developments in the Middle East, including the crisis in Yemen, as well as negotiations on Tehran’s nuclear program.

Yemen has been targeted by Saudi airstrikes since March 26 in a campaign aimed at restoring power to the fugitive former president, Abd Rabbuh Mansur Hadi.

Saudi Arabia’s military aggression against the impoverished Arab country, which is being carried out without a United Nations mandate, has claimed the lives of almost 2,600 people so far.