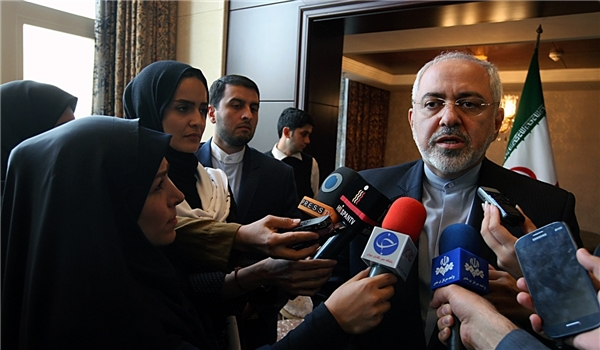 Iran will not negotiate its national pride: FM

Astana, April 13, IRNA – Foreign Minister Mohammad Javad Zarif said on Monday that Iran wants removal of all sanctions but not in any cost.

Speaking in Kazakhstan State Academy of Law, Zarif noted that Iran will not negotiate its national pride and interests in exchange for removal sanctions.

Zarif referred to the historical problems between Iran and the West and said that Iranian nation is not optimistic towards West.

Resolution of problems between Iran and West takes time, he added.

Foreign minister underlined that both sides of nuclear negotiations are concerned about violation of the agreement by the other side.

West should not expect good relations with Iran and in the meantime impose sanction on it, he said.

Elsewhere in his remarks, Zarif called Iran’s relation with the central Asian countries as historical and cultural, adding that the North-South Transnational Rail Corridor connecting Kazakhstan to Iran via Turkmenistan can help booming the regional countries’ economy.

On terrorism, Zarif said it will not be confined to a certain region and will boomerang on sponsors.

He said Iran wants peaceful relations with the world including the neighbors and Persian Gulf littoral states.

Iran will use all political capacities to eliminate ISIL threat against the reign, Zarif noted.

Referring to the Saudi airstrikes against Yemen, he said that continuation of military operation in Yemen will complicate the situation and would increase hatred there.

The fragile political situation in Yemen will provide al-Qaeda to use the region as a safe haven to destabilize the region, Zarif added.

During a ceremony held in Kazakhstan State Academy of Law, Zarif was awarded an honorary doctorate in law.

On April 2, Iran and the P5+1 group of world powers adopted a joint statement after marathon talks in Lausanne calling, among other things, for the removal of the UNSC sanctions against the Islamic Republic.

The statement was read out in a joint press conference in the Swiss city by the EU high representative, Federica Mogherini, and Zarif.