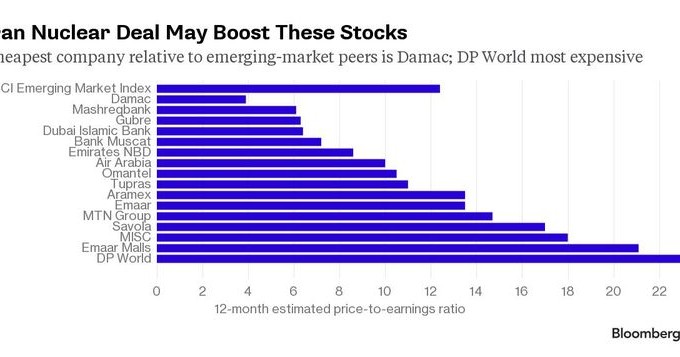 The primary focus for many of them, though, isn’t Iranian companies themselves, but rather multinationals that are located in nearby countries as well as those that have kept ties with the Islamic republic during sanctions. Their business, the thinking goes, would get a big lift from an opening up of the Middle East’s second-biggest economy.

Negotiators are seeking to finalize by June a deal that would check Iran’s nuclear program in exchange for an end to sanctions.

The biggest beneficiaries could include banks and developers in Dubai and a Malaysian shipper that may see orders climb if Iran resumes global oil exports. Here are 16 stocks identified by analysts at firms including Exotix Ltd., Global Securities and Erste Securities Istanbul as potential winners.

Dubai will get a 5 percent boost to its economy from lifting sanctions on Iran, according to Hasnain Malik, the head of frontier-markets equity strategy at Exotix Partners LLP in Dubai.

“Banks and real-estate companies could see a commensurate impact in terms of value of deposits or trade finance and property purchases,” Malik said.

* MTN Group Ltd. (MTN SJ): South African mobile-phone operator owns 49 percent of MTN Irancell, the second-biggest telecommunications company in Iran. MTN said last week it has about $1 billion to repatriate from Iran, including an accumulated dividend and loan repayment due from Irancell.

“They’ll have the benefit of being able to repatriate cash that’s been stranded there for some time,” David Lerche, an analyst at Avior Research (Pty) Ltd. in Johannesburg, said by phone on Friday. “The lifting of sanctions is probably going to be positive for the Iranian economy as a whole, and that would help consumer spending and therefore MTN’s operations in Iran.”

* MISC Bhd (MISC MK): The Malaysian ship operator rose to a 2008 high last week following the framework accord. The tanker shipping market will benefit as Iran will probably start exporting more crude after a deal is reached, Raymond Yap, an analyst at CIMB in Kuala Lumpur, said in a report on April 6.

“Once those restrictions are removed, I suspect Dubai would become the hub” for trade with Iran, Bryan Plamondon, a senior economist for the Middle East and North Africa at IHS Global Insight in Massachusetts, said by phone on April 9. “Jebel Ali port is a huge facilitator for trade.”

* Gubre Fabrikalari TAS (GUBRF TI): The Turkish fertilizer maker owns 49 percent of Razi Petrochemical Co. in Iran, which accounts for almost half of Gubre’s consolidated revenue and about 80 percent of its earnings before interest, taxes, depreciation and amortization, according to Global Securities.

“In the medium term, if we see further steps taken to integrate Iran to the western world, a lower risk premium would be positive,” Evrim Dairecioglu, an analyst at Erste Securities in Istanbul, said by phone.

* Tupras Turkiye Petrol Rafinerileri AS (TPRS TI): Tupras, Turkey’s sole crude refiner, may procure more oil from Iran on the back of the deal this year, according to Global Securities.

* Air Arabia PJSC (AIRARABI UH): The budget airline flies to Tehran, Abadan, Mashhad and Shiraz. As of April 1 and April 10 respectively, the carrier was due to start flights to Isfahan and Sanandaj.

“The nuclear deal is likely to have a big impact on Iran’s tourism industry,” Helen Elfer, Lonely Planet’s Middle East destination editor, said by e-mail. “More flights to the country and access to the international banking system would make a major difference to travelers, and over time the tourism infrastructure is bound to develop substantially.”

* Savola Group (SAVOLA AB): The Saudi Arabian food producer is active in Iran via its unit Afia International Co., which also has operations in the kingdom, Egypt, Turkey, Kazakhstan and Jordan. Along with Aramex, the company will benefit from Iran’s gradual reintegration, according to Exotix.

* Oman Telecommunications Co. (OTEL OM), Bank Muscat SAOG (BKMB OM): “As a potential recipient of Iranian gas and a conduit for Iran-India trade, Oman’s macroeconomic outlook should improve and broad beneficiaries are the likes of Bank Muscat and Omantel,” Malik of Exotix said.