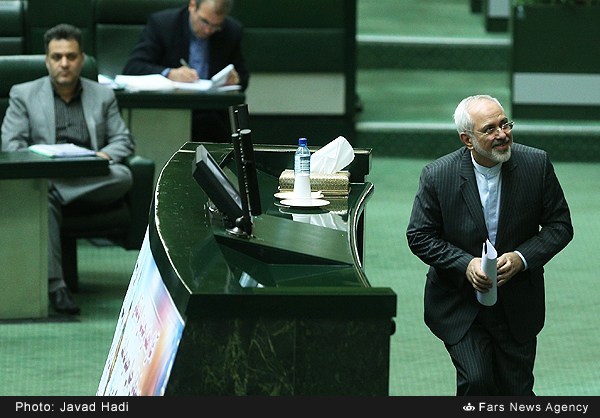 TEHRAN (FNA)- Iran’s foreign minister and nuclear chief both told a closed-door session of the parliament on Tuesday that the country would inject UF6 gas into the latest generation of its centrifuge machines as soon as a final nuclear deal goes into effect by Tehran and the six world powers.

Zarif and the Atomic Energy Organiation of Iran (AEOI) Chief Ali Akbar Salehi are taking part at a closed-door session at the parliament this morning to brief the legislature about the details of the latest round of the nuclear talks with the Group 5+1 (the five permanent UN Security Council members plus Germany) and the joint statement released by the seven nations in Lausanne, Switzerland, on Thursday.

“The AEOI chief and the foreign minister presented hopeful remarks about nuclear technology R&D which, they said, have been agreed upon during the talks (with the six world powers), and informed that gas will be injected into IR8 (centrifuge machines) with the start of the (implementation of the) agreement,” member of the parliament’s National Security and Foreign Policy Commission Javad Karimi Qoddousi said following the closed-door session at the legislature today.

The lawmaker further pointed out that the Iranian Foreign Ministry also plans to release a Factsheet about the Lausanne statement to stress the concerns of the nation and the MPs, reiterating that the release of this factsheet has been the most important news given to the MPs in today’s session.

“This is the most important thing that we should wait for in the next few days so that those issues that have stirred serious concern among the Iranians will be revised and released in this factsheet,” he added.

“Salehi also portrayed an image of Iran’s nuclear situation and position on the global scene,” he added.

Iran and the G5+1 started their new round of talks in Lausanne, Switzerland, last week to narrow their differences over Tehran’s nuclear energy program ahead of a July 1 deadline.

After nine days of hard work, the seven nations reached an understanding on Thursday which laid the ground for them to start drafting the final nuclear deal.