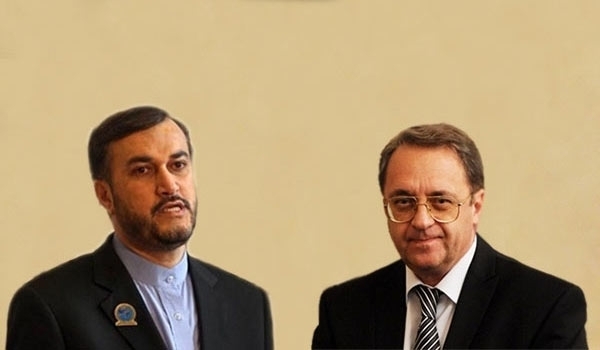 During the phone talk today, the Iranian and Russian deputy foreign ministers voiced concern over the continuation of the Saudi-led airstrikes on Yemen and warned against the repercussions of the Saudi aggression on regional security and stability.

Amir Abdollahian and Bogdanov called for immediate and unconditional halt to the Saudi airstrikes and start of national dialogue in Yemen.

The two diplomats warned that the breakout of a human tragedy in Yemen is inevitable due to the land and sea siege of Yemen as well as the Saudi blockade of the flow of aids to the country.

The Iranian and Russian deputy foreign ministers also voiced their support for the trend of Syrian-Syrian dialogue which is currently underway in Moscow and said that political solution is the only way to help resolve the Syrian crisis.

Amir Abdollahian and Bogdanov also strongly criticized certain states’ continued arms support for terrorist groups in Syria and their instrumental use of the terrorist groups to intensify the problems in Syria.

Saudi Arabia has been striking Yemen for 13 days now to restore power to fugitive president Mansour Hadi, a close ally of Riyadh. The Saudi-led aggression has so far killed at least 906 Yemenis, including hundreds of women and children.

Syria has been grappling with a deadly crisis since March 2011. The violence fuelled by Takfiri groups has so far claimed the lives of over 210,000 people, according to reports. New figures show that over 76,000 people, including thousands of children, lost their lives in Syria last year.

The Takfiri terrorist group, with members from several western countries, controls swathes of land in Syria and Iraq, and has been carrying out horrific acts of violence such as public decapitations and crucifixions against all communities such as Shiites, Sunnis, Kurds and Christians.