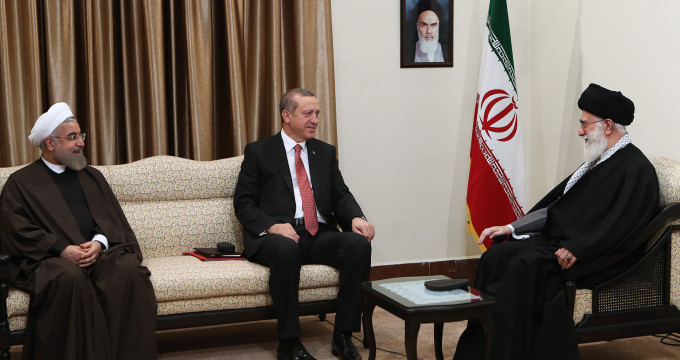 Ayatollah Khamenei calls for end to aggression against Yemen

Leader of the Islamic Revolution Ayatollah Seyyed Ali Khamenei says a halt to the military aggression against Yemen and foreign meddling in the country is the only solution to the crisis plaguing the Arabian Peninsula state.

The Leader made the remarks in a meeting with Turkish President Turkish Recep Tayyip Erdogan in the Iranian capital, Tehran, on Tuesday.

Leader of the Islamic Revolution Ayatollah Seyyed Ali Khamenei (2nd R) receives Turkish President Recep Tayyip Erdogan (C), his Iranian counterpart, Hassan Rouhani (4th R), as well as the Turkish delegation accompanying Erdogan, Tehran, April 7, 2015. © Khamenei.ir
Ayatollah Khamenei further stressed that the “Yemenis should decide the future of their country,” adding, “Today, the United States and the Zionists are happy with differences among Muslim countries and the solution to these problems is cooperation between the Islamic countries and taking practical and constructive measures.”

The Leader also stressed that regional countries will not benefit from trusting the West and the US, adding that everyone can clearly see the outcome of the measures taken by the West in the region which is to the detriment of the region and Islam.

Ayatollah Khamenei further referred to developments in Iraq and Syria and violent acts of terrorist groups in these countries, adding that those who fail to see the role of the enemy in the crises in these countries have deceived themselves.

The Leader said the US and the Israeli regime are most satisfied with the developments in the region and do not want an end to the scourge of the ISIL Takfiri group.

“Who supports these currents financially and logistically?” the Leader asked, pointing to the brutalities by the ISIL Takfiri group and other terrorist groups in the region.

Leader of the Islamic Revolution Ayatollah Seyyed Ali Khamenei (R) receives Turkish President Recep Tayyip Erdogan (C) and his Iranian counterpart, Hassan Rouhani, in Tehran on April 7, 2015. © Leader.ir
Ayatollah Khamenei then pointed to the phenomenon of the “Islamic awakening” and the insatiable thirst of the nations for Islam as main reasons for the rising sensitivity of the enemies, saying “For a while now, the enemies of Islam have launched their counterattack against this awakening and the unfortunate reality is that some Muslim governments are betraying (the others) and put their money and facilities at the service of the enemy.”

Ayatollah Khamenei further touched upon the current situation in Iraq and highlighted Iran’s assistance to the Iraqi government in its battle against the terrorists, saying, “Iran has no military presence in Iraq, but the two nations of Iran and Iraq have historic, deep-rooted, and very close relations.”

The Turkish president, for his part, emphasized the need for the Islamic world to stand on its feet in resolving the existing problems, saying “There are many problems in the region which we should resolve together and one should not wait for the West to resolve these problems.”

Heading a high-ranking delegation, Erdogan arrived in Tehran earlier in the day on an official one-day visit to hold talks with senior statesmen of the Islamic Republic.