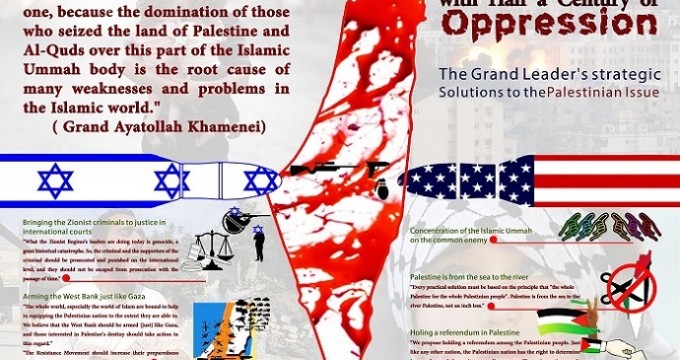 Mechanisms for dealing with half a century of oppression

The Grand Leader’s strategic solutions to the Palestinian Issue

· Concentration of the Islamic Ummah on the common enemy

· Palestine is from the sea to the river

· Holing a referendum in Palestine

“We propose holding a referendum among the Palestinian people. Just like any other nation, the Palestinian nation has the right to determine its own fate and choose its own ruling system. The entire native people of Palestine, be they Muslims, Christians and Jews, not the foreign immigrants, wherever they are: inside Palestine, in refugee camps and every other places, should take part in a general and orderly referendum and decide the future political system of their country.”

· Bringing the Zionist criminals to justice in international courts

“What the Zionist Regime’s leaders are doing today is genocide, a great historical catastrophe. So, the criminal and the supporters of the criminal should be prosecuted and punished on the international level, and they should not be escaped from prosecution with the passage of time.”

“The whole world, especially the world of Islam are bound to help in equipping the Palestinian nation to the extent they are able to. We believe that the West Bank should be armed [just] like Gaza, and those interested in Palestine’s destiny should take action in this regard.”

“The Resistance Movement should increase their preparedness day by day and fortify their military forces in Gaza.”