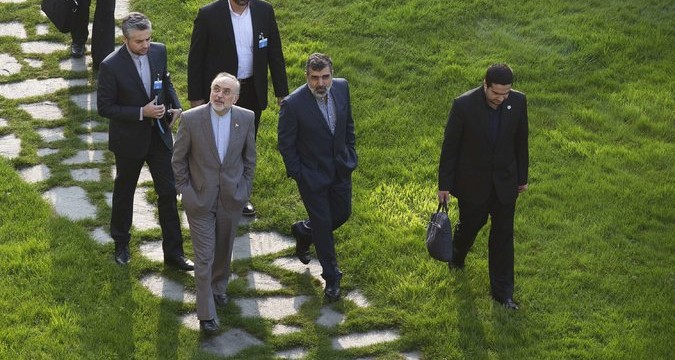 Answering a journalist’s question about extension of this round of nuclear talks, Zarif replied, ‘God willing, we will be in Tehran, tomorrow’.

He added that he was hopeful of resolution of Iran’s nuclear issue, regarding the Lausanne talks.

Zarif referred to the possible release of a press statement late Thursday, adding that if things go well, reaching a final deal before the July deadline is possible.

Elsewhere in his remarks, foreign minister said that release of joint press statement needs coordination between the G5+1 (the US, Russia, China, France, Britain and Germany) and Iran.

Various members of the G5+1 have different attitudes towards resolution of Iran’s nuclear issue and release of press statement needs coordination among all the member states’ representatives, Zarif added.

He underscored that Iran and the G5+1 have reviewed the solutions during Lausanne negotiations, stressing that the remaining issues need be discussed in order to reach a final agreement before the July deadline.

Zarif on Thursday conferred with High Representative of the European Union for Foreign Affairs and Security Policy Federica Mogherini on latest developments in nuclear talks.

The G5+1 member states have held an internal meeting on Thursday morning to confer on next steps of talks about Iran nuclear issue.

Representatives from Iran and the G5+1 group continue holding successive rounds of talks in Lausanne to narrow the existing differences on Tehran’s nuclear activities.

The two sides have actually missed a March 31 deadline for reaching a mutual understanding on whether they could continue further talks on Iran’s nuclear program.

The potential agreement paves the way for a much broader deal by the end of June which guarantees the peaceful nature of Iran’s nuclear activities in return for a promise by international powers to lift unfair sanctions against the country.