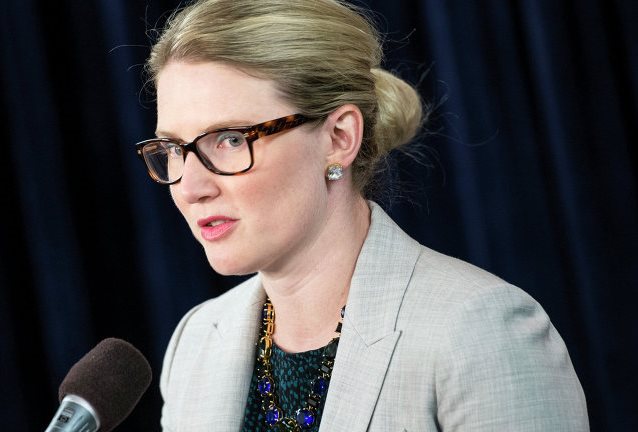 US sees 50/50 chance of Iran deal by Tuesday deadline

Washington reiterates it won’t sign a ‘bad’ agreement, as nuclear talks go down to the wire in Switzerland

The US State Department said it believes there is a 50 percent chance of reaching a framework accord with Iran by Tuesday, as negotiators raced to finalize a deal with Tehran over its nuclear program before a March 31 midnight deadline

Spokeswoman Marie Harf was quoted by Reuters Monday as saying that the chances of an agreement with Iran stood at 50-50.

It is unclear what move the six world powers, known as P5+1, will take in the event of a negotiations breakdown, but Harf indicated that all options remain on the table.

“We’re focused on these next 24 hours, they’re very crucial. We know that diplomacy is the best way to handle this, but we have other options if we can’t get this done diplomatically,” Harf told MSNBC news Monday from the Swiss resort town of Lausanne, where diplomats had gathered to hammer out an accord.

Negotiations with Tehran over its controversial nuclear project have been underway since late 2013. Iran insists that its program will only be used for peaceful purposes, but other nations, notably Israel, fear that if economic sanctions on the Islamic Republic are relaxed as part of the agreement, Iran will clandestinely break out to the bomb.

Harf denied reports on Sunday that a deal with Tehran had been agreed and that the Iranians had backed out at the last moment.

“The notion that we had some agreement in the last 24 hours is factually inaccurate,” Harf said.

“All of the details of this agreement are interrelated to each other, nothing is agreed until everything is agreed. On that specific issue of whether their stockpile will be shipped to another country or will be diluted in-country, we and Iran have not come to an agreement on that, even tentatively. So the notion that in the last 24 hours there has been some breakdown in that agreement on that issue just isn’t accurate,” she said.

Asked by reporters what plans will be made in the event of a no-deal, Harf intoned that the US will have to take a “hard look” at its options, the outcome of which “I don’t want to predict.”

An interim accord struck with Iran in November 2013 will stay in place until June 30. By that time, a framework draft will finalized into a full deal, under the timetable set by negotiators.

With Tuesday’s target date for a framework accord just hours away, the top diplomats from the five permanent members of the UN Security Council and Germany were meeting with Iran to try to bridge remaining gaps and hammer out an understanding that would serve as the basis for a final accord to be reached by the end of June.

“We are working late into the night and obviously into tomorrow,” said Kerry, who has been meeting with his Iranian counterpart Mohammad Javad Zarif in Lausanne since Thursday in an intense effort to reach a political understanding on terms that would curb Iran’s nuclear activities in exchange for sanctions relief.

“There is a little more light there today, but there are still some tricky issues,” Kerry said. “Everyone knows the meaning of tomorrow.”

Kerry and others at the table said the sides have made some progress, with Iran considering demands for further cuts to its uranium enrichment program but pushing back on how long it must limit technology it could use to make atomic arms. In addition to sticking points on research and development, differences remain on the timing and scope of sanctions removal, the officials said.

German Foreign Minister Frank-Walter Steinmeier said Iran’s expectations from the talks are “very ambitious” and not yet acceptable to his country or the other five negotiating: the US, Britain, China, France and Russia.

“We will not allow a bad deal,” he said. “We will only arrive at a document that is ready to sign if it … excludes Iran getting access to nuclear weapons. We have not yet cleared this up.”

In particular, Steinmeier said the question of limits on research and development that Iran would be allowed to continue was problematic.

Other officials said the issue of the scope and timing of sanctions relief was also a major sticking point.

In a tweet, Gerard Araud, the French ambassador to the United States, said that “very substantial problems remain to be solved.”

In a sign that the talks would go down to the wire on Tuesday, Russian Foreign Minister Sergey Lavrov left, just a day after arriving, to return to Moscow. His spokeswoman said he would will return to Lausanne on Tuesday only if there was a realistic chance for a deal. Meanwhile, Iran’s deputy foreign minister, Abbas Araghchi, told Iranian state television that the talks were not likely to reach any conclusion until “tomorrow or the day after tomorrow.”

“We are not still in the position to be able to say we are close to resolving the (remaining) issues but we are hopeful and we’ll continue the efforts,” he said.

The Obama administration says any deal will stretch the time Iran needs to make a nuclear weapon from the present two to three months to at least a year. But critics object that it would keep Tehran’s nuclear technology intact.

President Barack Obama on Monday enlisted his predecessor John F. Kennedy in defense of the contentious talks. Speaking at the dedication of the Edward M. Kennedy Institute for the US Senate in Boston, Obama said the negotiators led by Secretary of State John Kerry were “standing up for a principle that Ted and his brother, President Kennedy, believed in so strongly.”

“‘Let us never negotiate out of fear, but let us never fear to negotiate,’” he said citing a famous line from JFK’s inaugural address.

Prime Minister Benjamin Netanyahu, at the forefront of accusations that Iran helped Shiite rebels advance in Yemen, says the deal in the works sends the message that “there is a reward for Iran’s aggression.”

“But we do not shut our eyes, and we will continue to act against any threat,” he said, an allusion to Israeli warnings that it will use force as a last resort against Tehran’s nuclear program.

Officials in Lausanne said the sides were advancing on limits to aspects of Iran’s program to enrich uranium, which can be used to make the core of a nuclear warhead.

Tehran has said it is willing to address concerns about its stockpiles of enriched uranium, although it has denied that will involve shipping it out of the country, as some Western officials have said. One official said on Monday that Iran might deal with the issue by diluting its stocks to a level that would not be weapons grade.

A senior State Department official said that shipping the stockpile is one of the “viable options that have been under discussion for months … but resolution is still being discussed.”

Uranium enrichment has been the chief concern in over more than a decade of international attempts to cap Iran’s nuclear programs. But a Western official said the main obstacles to a deal were no longer enrichment-related but instead the type and length of restrictions on Tehran’s research and development of advanced centrifuges and the pace of sanctions-lifting.

Both demanded anonymity — the State Department official in line with US briefing rules and the Western official because he was not authorized to discuss the emerging deal.

Over the past weeks, Iran has moved from demanding that it be allowed to keep nearly 10,000 centrifuges enriching uranium, to agreeing to 6,000. The officials said Tehran now may be ready to accept even fewer.