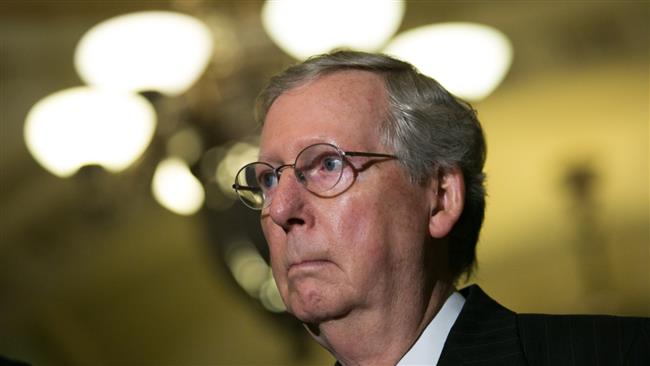 TEL AVIV, Israel — With the deadline on an interim nuclear agreement with Iran less than 48 hours away, a US Senate delegation led by Majority Leader Mitch McConnell, R-Ky., visiting here Sunday joined Israeli officials to sound the alarm about an imminent “bad deal.”

Israeli Defense Minister Moseh Ya’alon quickly dismissed the Iranian regime as one that can not be trusted. “One does not have to be an intelligence agency member to know that Iran is lying without blinking, that today it is the biggest danger to the stability of the Middle East and the entire world,” he said in a statement.

Ya’alon and Prime Minister Benjamin Netanyahu met with the McConnell-led Senate delegation Sunday morning in Jerusalem to discuss the dangers of the deal being negotiated between the P5+Iran in Switzerland.

Warning against the onslaught of Iranian hegemony, which most recently has manifested itself in Yemen, Netanayhu warned: “This is happening before our eyes and I think the most important thing is to make sure that Iran doesn’t get a path to the bomb and that Iran’s aggression in Yemen and elsewhere, including around Israel’s borders is stopped.”

Intelligence Minister Yuval Steinitz, who was also present at the meeting with the Senate delegation, told the Israeli Army Radio station that the international community has given Iran the “green light” to develop a nuclear bomb and to be one of the largest sponsors of global terrorism.

“We don’t get regular updates every hour. I don’t know what the latest developments are, but I do know the general direction is a negative one. It’s a bad deal, full of loopholes that will enable Iran to be a nuclear state,” he said of the deal itself adding that history will live to regret it once it’s finalized.

McConnell voiced his unequivocal support to Israel during his visit. “Let me add on our behalf, first, we were all extraordinarily impressed with your address to the joint session a few weeks ago. I want to assure all Israelis that the US-Israel relationship is still, no matter what’s been said recently, in very, very strong shape on a bipartisan basis in the US Congress,” he said referring to Netanyahu’s controversial address to Congress last month which was ostensibly done for the purpose of warning against the Iranian threat, but came under fire for its proximity to Israeli elections.

Critics of Netanyahu blamed his speech for widening the ever-growing rift between Obama and the prime minister.

McConnell assured Netanyahu that there is strong support among Congress to vote on whatever deal is signed to ensure that a “bad” deal won’t pass.

“The group who are here share your concerns about this potential agreement and there are options that the United States has in a wake of an agreement and if there is no agreement. The option if there’s an agreement is a bill that we intend to vote on that enjoys bipartisan support to require that agreement come to Congress for approval,” he said.

McConnell was referencing a bipartisan open-letter to Obama signed by 367 members of Congress that warned the president that Congress would have to sign off on whatever deal transpires between the P5+1 and Iran.