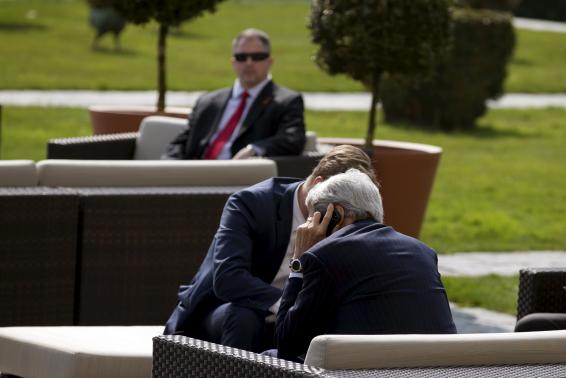 As the negotiations come down to the wire over a multi-nation deal supposedly aimed at curbing Iran’s nuclear ambitions, Secretary of State John Kerry reportedly gave a short and surprising answer when asked if an agreement would be reached by the self-imposed Tuesday deadline.

Laura Rozen, a reporter for Al-Monitor, which focuses on events affecting the Middle East, has told her more than 52,000 twitter followers that Kerry referred to “Allah” in his answer.

Not only did the chief U.S. negotiator at the Iran nuclear talks make reference to Allah; he supposedly did it by speaking Arabic.

In her tweet, Rozen was referencing an earlier twitter post by an Iranian-American journalist. The Arabic term Kerry is said to have used translates as “God willing” or “If Allah wills it.” Though John Kerry’s reported use of “Inshallah” hasn’t yet generated a lot of social media reaction, a number of Twitter posts have noted with some concern that the U.S. secretary of state is commenting in Arabic about such an important deal involving the interests of the United States and its Western allies.

Although the U.S. has taken the lead in the Iran nuclear talks, Britain, France, Germany, Russia, and China also are involved. It’s noteworthy that Israel, America’s biggest friend and ally in the Middle East and the country that would be most threatened should Iran develop a nuclear weapon, is not participating directly in the negotiations.