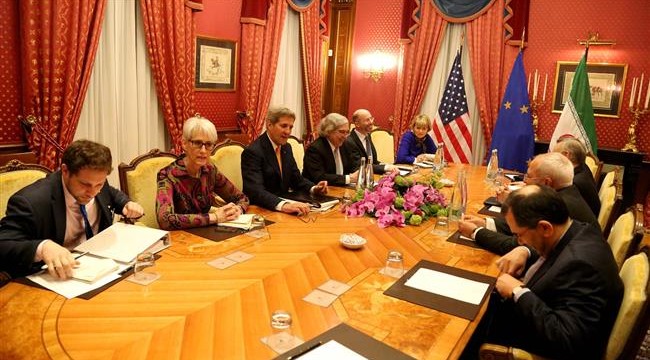 TEHRAN (FNA)- A source close to the Iranian team of nuclear negotiators with the Group 5+1 (the US, Russia, China, France and Britain plus Germany) underlined that both sides are trying hard to find solutions for striking a final deal, while nuclear research and development as well as removal of sanctions are still the most important unresolved issues.

“Sanctions and research and development are the areas where Iran and the G5+1 still have differences,” the informed source told FNA in Lausanne, Switzerland, on Sunday.

He noted that both sides have provided solutions for resolving the issues, but there has been no consensus over the solutions yet.

“Both sides will do their best today to find solutions for these issues,” the source added.

Earlier today, Iranian Foreign Minister Mohammad Javad Zarif underlined that Tehran and the G5+1 have made progress in achieving solutions, but said the two sides still have to work on several important issues.

“We have made progress in reaching acceptable solutions, but we still have to work on some important issues; the key to striking an agreement lies in this strategic choice that the other side should make: pressure and sanctions or interaction and agreement by the other side,” Zarif wrote on his facebook page.

He noted that both sides have been involved in difficult and intensive nuclear negotiations in the past few days and the arrival of G5+1 foreign ministers has made the situation more complicated.

Zarif described his meetings with his German and French counterparts as serious, but in the meantime positive.

On Saturday, Zarif called on the G5+1 to show more flexibility in the talks with Iran, and said Iran is ready for striking a “good” final deal with the world powers.

“In negotiations, both sides must show flexibility. We are ready to make a good deal for all. We wait for our counterparts’ readiness,” Zarif wrote on his Twitter account.

Zarif voiced satisfaction in his afternoon meetings with his French and German counterparts, and said both sides have now grown a better understanding.

“I think we now have a better understanding of issues; I think we can move towards a solution through a common understanding,” Zarif, also Iran’s top negotiator in the nuclear talks with the world powers, said after his meetings with Laurent Fabius and Frank Walter-Steinmeier in Lausanne, Switzerland.

He said he has had very good meetings with the French and German foreign ministers, and said, “I think our German and French friends are willing to play a very direct role in both the settlement (of the nuclear issue) and in future relations; we discussed very good points on how to proceed and resolve the problems.”

“We have always said that achieving a solution is possible with political will; from my meetings with German and French foreign ministers I realized that the other side has also entered the talks with the same interest,” he added.

He pointed to his meetings with Fabius and Walter-Steinmeier, and said, “We discussed all issues which need to be resolved and I think we made progress and we are moving ahead; I think we can have the needed progress.”

On Friday, Zarif underlined that major differences are still in place between Tehran and the six world powers, adding that striking a final deal depends on the political will of the other side.

“We are not close to a deal as reaching a comprehensive agreement needs political will and choosing between pressure and agreement,” Zarif told reporters in Lausanne, Switzerland, on Friday night.

“We are proceeding, we still have work to do and we are trying hard,” he added.

He reiterated that both sides can definitely find solutions, but reaching a solution requires political will from the opposite side.

“The reason why I emphasize the other side’s political will is that the Islamic Republic of Iran has the political will at the highest levels,” he added.

“All differences are serious and we are trying to reduce these differences,” Araqchi, also a senior negotiator in the talks with the world powers, told reporters in Lausanne, Switzerland.

“… we are still hopeful and optimistic, but it is still soon to state if we will be able to obtain a solution on all issues or not,” he added.

Araqchi pointed to the Iran-G5+1 meetings on Friday, and said, “Bilateral and multilateral meetings at the level of experts, deputy FMs, and FMs will be held today and we hope these meetings lead to progress in the negotiations.”

He noted that the Iranian negotiators will stay in Lausanne as long as needed.

Iran and G5+1 started their new round of talks in Lausanne on Thursday.

Zarif said last Saturday that Tehran and the 5+1 group of powers had found technical and political solutions to their differences.