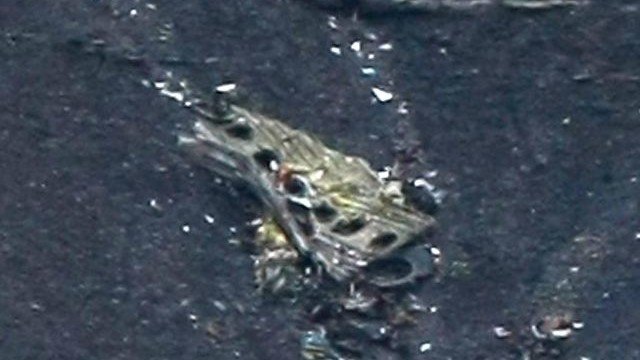 Report: Pilot in German airbus crash was locked out of cockpit

Cockpit voice recordings shows one of pilots left and could not get back in before plane went down, NYT reports.

Investigators have retrieved cockpit voice recordings from one of the “black boxes” of the German jet that crashed in the Alps, killing everyone on board, and the New York Times said the audio showed one of the pilots left the cockpit and could not get back in before the plane went down.

“The guy outside is knocking lightly on the door and there is no answer,” an unnamed investigator told the Times, citing the recordings. “And then he hits the door stronger and no answer. There is never an answer.”

“You can hear he is trying to smash the door down,” the investigator added.

The retrieval of the recordings came as French President Francois Hollande, Germany’s Angela Merkel and Spain’s Mariano Rajoy travelled to the crash site in a remote French Alpine region to pay tribute to the 150 victims, mostly Germany and Spanish.

However, while Hollande promised that authorities would not rest until the causes of the crash were known, France’s BEA air incident investigation bureau said it was still far too early to draw meaningful conclusions on why the plane, operated by the Germanwings budget arm of Lufthansa, went down.

“We have just been able to extract a useable audio data file,” BEA director Remi Jouty told a news conference at the agency’s headquarters outside Paris.

“We have not yet been able to study and to establish an exact timing for all the sounds and words heard on this file.”

Jouty expected the first basic analysis in “a matter of days” but warned this read-out could be subject to errors and that more work would be needed for a full interpretation.

Although he said “words” had been heard on the tape, Jouty would not confirm whether that meant the Airbus A320’s pilots were conscious and he gave no details of the recordings.

The New York Times quoted a senior military official involved in the investigation as saying the cockpit audio showed “very smooth, very cool” conversation between the pilots in the early part of the flight. The audio then indicated one of the pilots left the cockpit.

“We don’t know yet the reason why one of the guys went out,” the official added. “But what is sure is that at the very end of the flight, the other pilot is alone and does not open the door.”

A Lufthansa spokesman said the carrier was aware of the Times story, adding: “We have no information from the authorities that confirms this report and we are seeking more information. We will not take part in speculation on the causes of the crash. ”

He said that since the Sept. 11, 2001, hijacked plane attacks on the United States, cockpit doors cannot be opened from the outside, in line with regulations.

Interior Minister Bernard Cazeneuve earlier said a terror attack was not the main hypothesis. Jouty said, however, that no theory could be excluded yet.

While stressing it was too early to form a clear picture, he ruled out a mid-air explosion and said the crash scenario did not appear to be linked to depressurization.

In what seemed an accelerated push to extract as much early information as possible from the cockpit tapes, BEA officials worked late into the evening at their offices.

Officials did not rule out calling a new news conference quickly if there are concrete developments to report.

Jouty said the second, data black box had not been found and said he could not confirm Hollande’s remark that its casing had been discovered.

Among the new details, he said the airliner had flown in a straight line directly into the mountain, but would not say whether that seemed to be at the hand of a pilot or auto-pilot.

Germanwings said 72 Germans were killed in Tuesday’s crash, the first major air passenger disaster on French soil since the 2000 Concorde accident just outside Paris. Spanish officials said 51 Spaniards were among the victims.

As well as Germans and Spaniards, victims included three Americans, a Moroccan and citizens of Britain, Argentina, Australia, Belgium, Colombia, Denmark, Israel, Japan, Mexico, Iran and the Netherlands, officials said. However DNA checks to identify them could take weeks, the French government said.

Lufthansa Chief Executive Officer Carsten Spohr said the airline had never lost a plane during the cruise stage of flight.

“It is inexplicable this could happen to a plane free of technical problems and with an experienced, Lufthansa-trained pilot,” Spohr told reporters in Frankfurt.

Hollande, Merkel and Rajoy thanked search teams and met residents in the village of Seyne-les-Alpes, where the salvaging operation has been set up.

“Dear Angela, dear Mariano, rest assured … we will find out everything,” Hollande told Merkel and Rajoy, pledging to get to the bottom of what caused the crash. “France stands by you.”

Merkel replied: “It feels good that in a difficult hour like this that we’re standing so closely together in friendship.”

a320, Airbus A320 passenger aircraft, German jet crash, Quoted March 26, 2015
Photos: Iran, US start fresh nuclear talks in Lausanne
Why arming U.S. allies can be like sending weapons straight to the enemy