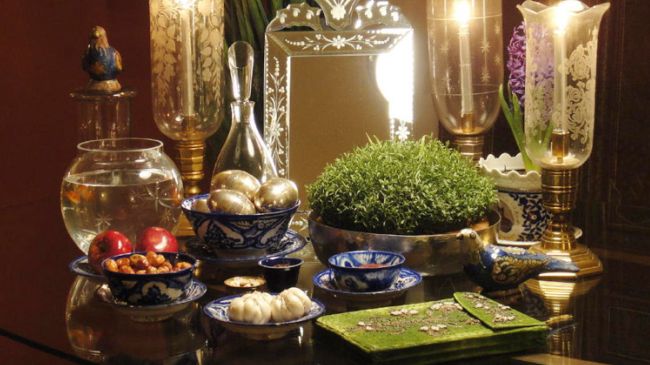 On Saturday, the 21st of March, people in Iran and several other countries began to celebrate Nowruz, the holidays marking the start of the Iranian New Year.

Afghanistan, Azerbaijan, the North Caucasus, the Kurdish areas in the Middle East, Tajikistan, Turkmenistan, Uzbekistan, Kyrgyzstan, Kazakhstan and scattered populations in Central and South Asia, in places like India and China, celebrate Nowruz.

The exact moment when the new year starts marks the beginning of spring, the moment when the Sun crosses the celestial equator, and night and day become almost equal in length. At this exact moment, Iranian families and millions upon millions of non-Iranian families, wherever they are in the world, get together, next to what we call the Haft-Seen table, to celebrate the start of the Iranian or Persian New Year, Nowruz. In recent centuries, this is announced by the sound of a gun, broadcast on radio and television, and Internet channels.

“Hafsin” is one of the traditions that’s been passed down generation after generation in all Persian-speaking countries, Iran and quite a number of nearby countries, and, as I said, in many other countries in this region. Iranians usually spend New Year’s Eve sitting next to the Hafsin, which is made up of seven items beginning with the Persian /s/ sound.

The usual 7 items used to decorate this table are:  Sir (garlic), Seeb (apple),Sabzeh (long, green sprouts), Serkeh (vinegar), Senjed (the fruit of the lotus tree), Samanu (a kind of sweet brown pudding), and Somagh (sumac, a purple powder sprinkled over rice and kebab).

Iranians usually lay the Hafsin table in their homes a few days before the New Year, and keep it like that for 13 days. According to ancient Persian culture and tradition, each one of these items represents something positive, such as health or new life.

But sitting together around “Haft-sin” at the turn of the year isn’t the only tradition practiced during Nowruz. With winter coming to an end and spring beginning, Iranians along with many peoples in the Middle East, Central Asia, and the caucuses start “spring cleaning” and buy new clothes for the coming year.

In the first episode of Iran Today in the Iranian New Year, we’re going to show you some of the ancient traditions and rituals of Nowruz.