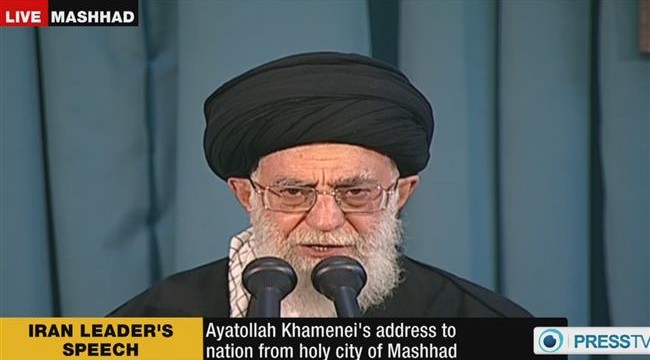 The Leader of the Islamic Revolution Ayatollah Seyyed Ali Khamenei says Iranian new year festival of Norouz is an occasion for strengthening friendship among Muslims and belong to all Muslim people.

Addressing the nation at a speech delivered in the northeastern Iranian city of Mashhad on Saturday, the Leader said marking Norouz is not in conflict with religious values as the Iranian nation uses Norouz as a framework for promoting Islamic values.

Reflecting on the true meaning of promoting good and prohibiting evil as an Islamic principle, the Leader said establishment and protection of the Islamic government is the most important of goods from the viewpoint of Islam.

Ayatollah Khamenei noted that, therefore, protecting the dignity of the Iranian nation, paving the way for progress of the Islamic society and promotion of judicial and economic justice are among the greatest of goods in an Islamic society.

The Leader noted that supporting the Islamic government in its efforts to run the country’s affairs is imperative for all people.

Ayatollah Khamenei stated that every government has its own supporters and critics and there is no problem if people criticize the government, provided that their criticism is limited within logical bounds.

The Leader specified that such criticism should not be done in a way as to strip incumbent officials of public trust.

The Leader also advised state officials to allow critics give voice to their viewpoints, noting that stifling criticism by the government is a mistake.

Ayatollah Khamenei stated that as the Leader, he has never closed eyes on mistakes committed by various governments, but has communicated them to state officials in a suitable manner, including by sending messages or in one-on-one meetings.

The Leader emphasized that his support for every government has been proportionate to that government’s performance in various fields.

Islam expects to see synergism and solidarity among people, Ayatollah Khamenei said, adding that the best manifestation of solidarity is that governments in an Islamic Establishment should be supported by all people even those who have not voted for them.