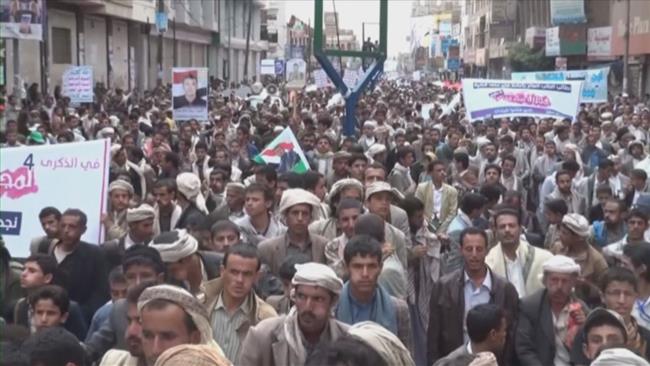 Yemeni people mark the fourth anniversary of “Friday of Dignity,” when former regime forces killed 50 people back in 2011.

Yemenis have taken to the streets in the capital, Sana’a, to mark the fourth anniversary of a deadly attack on protesters who opposed former dictator Ali Abdullah Saleh, Press TV reports.

On Thursday, for the second consecutive day, hundreds of people rallied in support of the martyrs of the Yemeni revolution, honoring those slain in the “Friday of Dignity.”

On March 18, 2011, loyalist to Saleh opened fire on protesters after Friday prayers in the Liberation Square in Sana’a, killing over 50 protesters and injuring hundreds more. The day is known as the ‘Friday of Dignity.’

Chanting slogans, the demonstrators held Saudi Arabia and the US responsible for fueling the political turmoil in the country and for the assassination of a senior member of Yemen’s Houthi movement Abdul Karim al-Khiwani in Sana’a.

Al-Khiwani, a member of the Ansarullah movement’s Revolutionary Committee in charge of administering the affairs of the capital, was shot dead by unknown gunmen on Wednesday.

“We came out today to commemorate the martyrs of the ‘Friday of Dignity’ and pay condolences to the family of Abdul Karim al-Khiwani,” a Yemeni army official said.

The army member also warned elements opposing the popular uprising that we stand by the “revolution and they (those opposing the revolution) will never be victorious.”

A similar demonstration was held a day earlier by students at Sana’a University.

“We, the female students of Sana’a University, who speak for all Yemenis, demand the prosecution of murderers involved in the Friday of Dignity. They must face justice and receive a punishment,” one of the student demonstrators said.

The demonstrators, who were chanting “Justice must be served,” called for the immediate prosecution of those who played a role in the 2011 massacre.

“We came out today in solidarity with the victims of the “Friday of Dignity.” We believe that their causes are still alive,” a protester said.

In February 2011, Yemeni people embarked on a revolution that eventually forced longtime dictator Ali Abdullah Saleh to quit after a year of mass street demonstrations demanding his ouster.

Saleh, who ruled Yemen for 33 years, stepped down in February 2012 under a US-backed power transfer deal in return for immunity.

The government of Hadi, however, was toppled from power in September, 2014, by the Houthi Ansarullah movement, who accused Hadi and his government of mass corruption at the service of a US agenda in Yemen.

The Yemeni revolutionaries, who now control power in the capital, still continue their fight with the elements loyal to the former dictator.