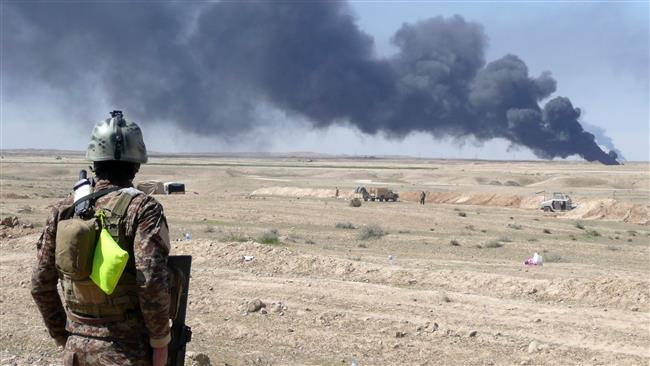 The Iraqi Air Force has inflicted heavy losses on the ISIL Takfiri group by carrying out a number airstrikes against its positions in the city of Tikrit.

On Wednesday, Iraq’s aircraft attacked selected targets in Tikrit, leaving dozens of militants dead and destroying their equipment in the regions of Thera Dijla and Nadhem, the Defense Ministry said.

The ministry released footage of some of the airstrikes on its website.

The army, backed by volunteer fighters, has managed to push the militants out of the city therefore many of the city’s residents who had fled ISIL are returning home.

The crisis in Iraq escalated after the ISIL terrorists took control of Mosul on June 10, which was followed by the fall of Tikrit, located 140 kilometers (87 miles) northwest of the capital Baghdad.

Ever since, the terrorists have resorted to atrocious crimes against the Iraqis in an attempt to breed fear amongst the nation and recruit more forces from around the globe.