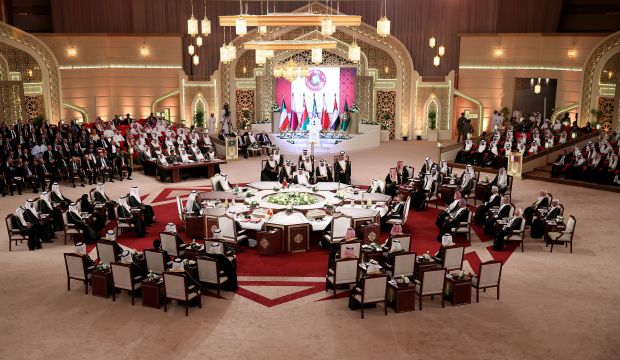 Arab states call for an end to Iran’s intrusions

A general view of the meeting of leaders during the Gulf Cooperation Council (GCC) summit in Doha, Qatar, on December 9, 2014. (AFP Photo/STR)

The session was presided over by Qatar’s Foreign Minister, Khalid al-Attiyah, who attempted to convey the stance of the Arab states on the issue of nuclear weapons. He stressed on the need to keep nuclear weapons out of the Middle East and called on Iran to respond positively to international efforts and enter into a political agreement for the sake of peace and stability of the region.

He highlighted the means and methods available to GCC countries to counter terrorism in the region, and assured that the menace will be curbed with the support of regional and international efforts. Moreover, GCC unequivocally rejected foreign meddling in Iraq in response to the Iranian regime’s role in the war-torn country.

According to the Saudi Press Agency (SPA), Khalid al-Attiyah said, “The GCC Arab States confirm their support for Iraq’s unity and territorial integrity and for the Iraqi government to help it for maintaining security and stability in Iraq, and non-interference in its internal affairs and extending its sovereignty over all its territory.”

He further said that this “wont’ be achieved but only with the cooperation of all spectrums of Iraqi people and concerted efforts to give priority to the interests of Iraq, preserve the coherence of its people and the unity of the national territory.”

While sharing his views on the Syrian crisis, al-Attiyah said that the suffering of the Syrian people has increased manifold over the last four years as the Syrian regime launched assault after assault against its people, who demand change. The Syrian regime doesn’t have any qualms with preserving power even if the cost is dead children, women and old people.

The ever-rising number of victims and displaced persons has failed to deter Bashar al-Assad, who has created a massive humanitarian crisis in Syria and elsewhere.
He emphasized on the need for quick and effective intervention by the United Nations and the international community to counter the phenomenon. He particularly highlighted the importance of the UN Security Council, which has the power to take decisive measures to deter al-Assad from further brutalizing defenseless Syrian people who are stuck in one or the other party of the territory.

The Syrian regime has been receiving consistent support from Iran. Without the financial, political and military backing from the Iranian regime, Bashar al-Assad would not have been able to stay in power to the detriment of the Syrian people and wider region. Iran’s involvement has directly enable al-Assad to perpetuate a cycle of violence that has consumed the lives of thousands and threatens to do more damage before it ever subsides.