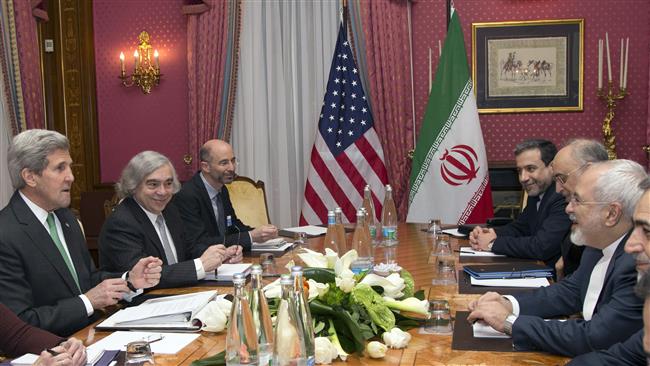 Iran, US to resume nuclear talks in Switzerland Wednesday

Nuclear talks between Iran and the United States, headed by the countries’ top diplomats, have ended in the Swiss city of Lausanne pending resumption on the following day.

The two sides met and talked on Tuesday in an attempt to bridge differences on the outstanding issues pertaining to Tehran’s nuclear program. Nuclear talks are to resume on 09:00 a.m. local time (0800 GMT) on Wednesday.

The European Union deputy foreign policy chief, Helga Schmid, was also in attendance at the talks.

Also on Tuesday, Salehi said up to 90 percent of differences over technical issues have been resolved, a major sign that Tehran is successfully bridging its differences with global powers on the details of its peaceful nuclear program.

“We have reached mutual understanding on a majority of issues [in the negotiations], there just remains a single sticking point, which is very important,” he told Iranian television.

Iran and the P5+1 countries – Britain, France, China, Russia, and the United States plus Germany – are in talks to narrow their differences on outstanding issues related to Iran’s nuclear energy program. The two sides have missed two deadlines since an interim deal was signed in November 2013. They have set July 1 as the next deadline for the talks.