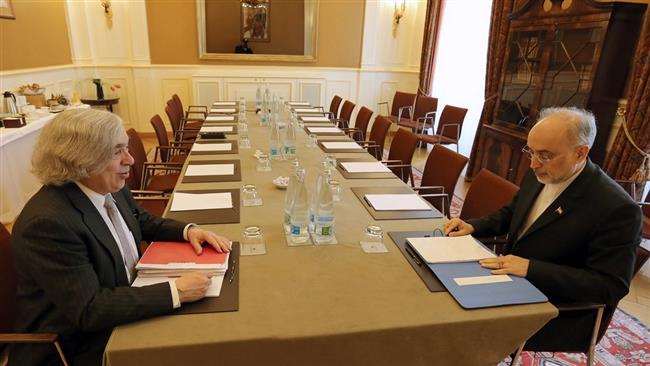 Head of the Atomic Energy Organization of Iran (AEOI) Ali Akbar Salehi holds a new meeting with US Energy Secretary Ernest Moniz in the Swiss city of Lausanne as part of negotiations aimed at clinching a deal over the Islamic Republic’s nuclear energy program.

On Wednesday morning, Salehi and Moniz opened a new round of high-level technical talks, which seek to bridge differences on the outstanding issues pertaining to the Iranian civilian nuclear activities.

Iranian deputy foreign ministers, Abbas Araqchi and Majid Takht-e Ravanchi, have separately kicked off negotiations with US Under Secretary of State for Political Affairs Wendy Sherman.

Earlier in the day, Salehi said that up to 90 percent of differences over technical issues have been resolved.

“We have reached mutual understanding on a majority of issues [in the negotiations], there just remains a single sticking point, which is very important,” he told IRIB News.

The latest round of the negotiations about the Iranian nuclear program kicked off in the Swiss city on Sunday with Salehi and Moniz holding high-level technical talks. Experts from Iran and the US as well as the AEOI spokesman, Behrouz Kamalvandi, also participated in the meeting.

Iran and the P5+1 countries – the United States, Britain, France, China, and Russia plus Germany – are seeking to seal a comprehensive nuclear deal by July 1.