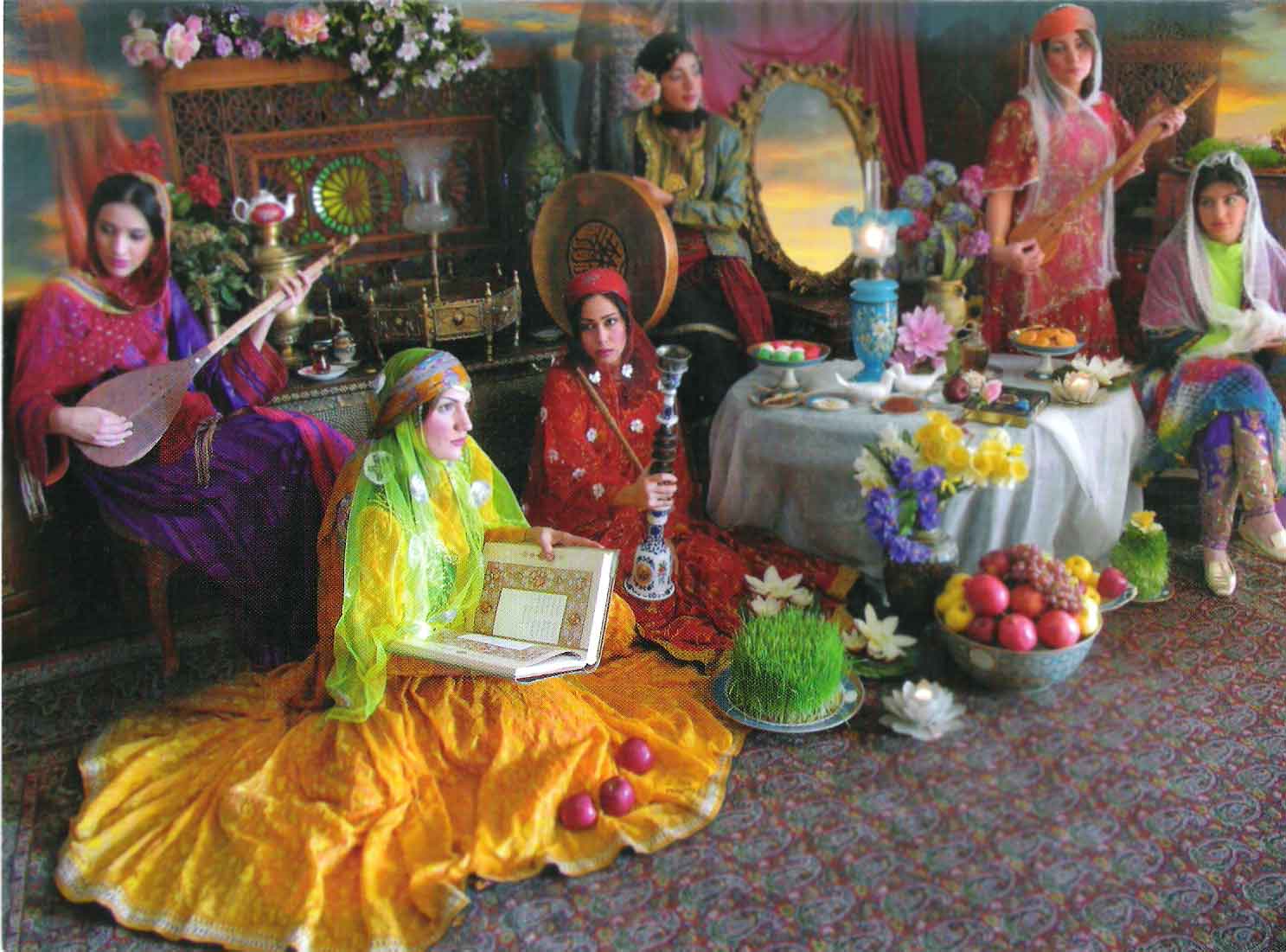 Originating in Iran’s ancient history, Nowruz is celebrated by more than 300 million people worldwide on March 21, the day of the spring Equinox, which marks the sun’s crossing of the Equator and the start of spring in the Northern Hemisphere. Nowruz is as one of the oldest and most cherished festivities celebrated for at least 3,000 years.

Nowruz is a messenger of peace, friendship, benevolence for the humankind and admiration for the nature not only for Iranians, but for several nations and tribes who adorn this ancient festivity and celebrate it. Nowruz is an opportunity for rethinking, restarting and remaking.

Nowruz is the spiritual heritage of humankind and the Iranians will be most delighted if the world nations enjoy this heritage and take advantage of it. Nowruz is the message of peace and friendship by the Iranians for the whole world.

Nowruz is a strong testimony to Iranian rich civilization, national characteristics and history. It proves how a nation with its irreversible determination to endure, and even flourish, through periods of devastation, political chaos, hardship and oppression.

For centuries, Persians have applied the Nowruz spirit to every dark challenge that has come their way. This spirit has made Nowruz far more than just a New Year celebration over the course of history.

Nowruz is a relic of ancient times. A memory of old tales and epics, a celebration of rebirth and rejuvenation. Spring has arrived and the previous year with all its events, good or bad, has passed. Renewed hope anticipates new achievements.

In harmony with rebirth of nature, the Persian New Year Celebration, or Nowruz, always begins on the first day of spring, March 21th of each year. Nowruz ceremonies are symbolic representations of two ancient concepts – the End and Rebirth.

Nowruz (Norouz) in Persian means “New day”. It is the beginning of the year for the peoples of Iran (Greater Iran, including: Afghanistan, Arran (Republic of Azerbaijan) and Central Asian Republics).

It begins precisely with the beginning of spring on vernal equinox, on or about March 21. Tradition takes Nowruz as far back as 15,000 years–before the last ice age.

It is not exactly known when and how the festival of Nowruz emerged. Some historians believe that natural changes in weathers gave rise to the festivities. Some consider it a national festival, while others regard it as a religious ritual.

According to Zoroastrians, the month of Farvardin (the first month of the Iranian solar calendar) refers to Faravashis, or spirits, which return to the material world during the last 10 days of the year. Thus, they honor the 10-day period in order to appease the spirits of their deceased ancestors. The Iranian tradition of visiting cemeteries on the last Thursday of the year may have originated from this belief.

According to lexicographer Mirza Ali Akbar Dehkhoda, ancient Iranians celebrated a feast called Farvardegan (Farvardyan) that lasted 10 days. Farvardegan was performed at the end of the year and was apparently a mourning ceremony and not a celebration welcoming the rebirth of nature. In ancient times the feast started on the first day of Farvardin (March 21) but it is unclear how long it did last. In royal courts, the festivities continued for one month.

The festival, according to some documents, was observed until the fifth of Farvardin, and then the special celebrations followed until the end of the month. Possibly, in the first five days, the festivities were of a public and national nature, while during the rest of the month it assumed a private and royal character.

Undoubtedly, the Nowruz celebrations are an ancient, national Iranian custom, but details of it prior to the Achaemenid era are unknown. There is no mention of it in Avesta ¬- the holy book of Zoroastrians.

In the ancient times, Iran was the cradle of civilizations for thousands of years and regarded as one of the most powerful countries in the world. As time passed, the Empire of Persia disintegrated gradually due to the invasions by the enemies of this land.

As a matter of fact, many glorious cultural, historical, festivals and customs have faded away and only traces of them have remained and several centuries of our homeland history is still in a “state of oblivion, darkness and ambiguity.”

Currently, after several thousands of years, Iranians and the people of nine other countries enthusiastically celebrate the Nowruz festival, irrespective of their age, language, gender, race, nationality or social status as this festivity knows no boundary.

The oldest archaeological record for the Nowruz celebration comes from the Achaemenid period over 2500 years ago. They created the first major empire in the region and built the Persepolis complex in southern Iran. This magnificent palace/temple complex was destroyed by Alexander the Great.

Throughout their often stormy history, Persians have endured hard times of civil wars, devastations, and political chaos. They have celebrated the height of human civilization and scientific and military achievements through the spirit of Nowruz.

Such a unifying spirit has often made Nowruz the target of much animosity by foreign invaders and anti¬national forces throughout the history of Iran.

King Jamshid is said to be the person who introduced Nowruz celebrations. Some 12 centuries later, in 487 B.C.E., Darius the Great of the Achaemenian dynasty celebrated the Nowruz at his newly built Persepolis in Iran. On that day, the first rays of the rising sun fell on the observatory in the great hall of audience at 06-30 a.m., an event which repeats itself once every 1400-1 years. The Persepolis was the place the Achaemenian king received on Nowruz, his peoples from all over the vast empire. The walls of the great royal palace depict the scenes of the celebrations.

We know the Iranians under the Parthian dynasty celebrated the occasion but we do not know the details. It should have, more or less, followed the Achaemenian pattern. During the Sasanian time, preparations began at least 25 days before Nowruz.

Twelve pillars of mud-bricks, each dedicated to one month of the year, were erected in the royal court. Various vegetable seeds–wheat, barley, lentils, beans, and others–were sown on top of the pillars. They grew into luxurious greens by the New Year Day.

The great king held his public audience and the High Priest of the empire was the first to greet him. Government officials followed next. Each person offered a gift and received a present. The audience lasted for five days, each day for the people of a certain profession. Then on the sixth day, called the Greater Nowruz, the king held his special audience. He received members of the Royal family and courtiers. Also a general amnesty was declared for convicts of minor crimes. The pillars were removed on the 16th day and the festival came to a close. The occasion was celebrated, on a lower level, by all peoples throughout the empire.

During the first two centuries of Islam in Persia, the festivities were not observed with much earnest due to sociopolitical transformation. Gradually, greedy Omayyad caliphs, intending to boost their income through gifts, revived the custom.

Nonetheless, Iranians have always been enthusiastic about preserving this custom, especially when they were under foreign domination.

Omayyad rulers, known for their tribal fanaticism, left no stone unturned to annihilate the traditions and cultural heritage of conquered lands.

According to the historian George Zeidan, Persians would pay 5,000 to 10,000 silver coins for permission to celebrate Nowruz during the reign of the Omayyads. Iranians made strenuous efforts to celebrate the occasion even though they had to pay a high price. Omayyad rulers greedy for wealth and power sought to strengthen their hegemony, apparently only resorting to Islam as a shield to protect their interests.

The festival was so glorious and sacred that even the most ruthless rulers used to grant general amnesty to captives and prisoners. The dignity of Nowruz is captured as Ahura Mazda on its splendid glory says: “On the day of Farvardin, even the infernal-dwellers return to this world to visit their families.”

A major part of the New Year rituals is setting a special table with seven specific items present, Haft Sin (Haft chin, seven crops before Islam). In the ancient times each of the items corresponded to one of the seven creations and the seven holly immortals protecting them.

Today they are changed and modified but some have kept their symbolism. All the seven items start with the letter S; this was not the order in ancient times. Wheat or barley representing new growth is still present. Fish the most easily obtainable animal and water are present. Lit candles are a symbol of fire. Mirrors are used today, origin unknown.

These were expensive items in ancient times and were made from polished metal. It is unlikely that all households would have one. Zoroastrians today place the lit candle in front of the mirror. Wine was always present. Today it is replaced by vinegar since alcohol is banned in Islam.

Egg a universal symbol of fertility corresponding to the mother earth is still present. Garlic is used to warn off bad omen. Samano a thick brownish paste is present today. It is a nutritious meal and could have been part of the feasts. Coins symbolizing wealth and prosperity, fruits and special meals are present as well.

On Jamshid as the people jewels streamed,
They cried upon him that New Year beamed
On Farvardin Hormuz in this bright New Year
Bodies were freed from pain all hearts from fear
New Year new king the world thus rendered bright

He sat resplendent on the throne in light

The International Day of Nowruz was registered on the UNESCO List of the Intangible Cultural Heritage of Humanity on February 23, 2010.