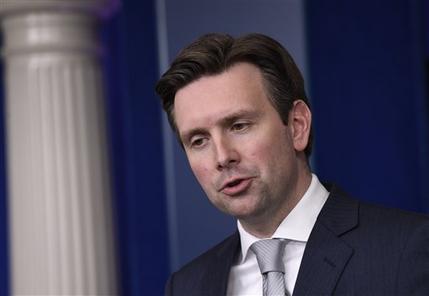 White House press secretary Josh Earnest has announced that sanctions imposed against Iran would be removed slowly should Tehran and the P5+1 group reach a final nuclear agreement.

In a press briefing on Monday, Earnest reiterated the lifting of anti-Iran sanctions would be gradual.

“What we could envision is as a presidential effort to slowly relax them [sanctions] in exchange for Iranian compliance,” he said.

The comments were made after 260 Iranian lawmakers on Monday demanded the removal of all sanctions as a condition for the implementation of any comprehensive nuclear deal.

The Iranian lawmakers said in a statement that the removal of all the sanctions and the closure of Iran’s nuclear dossier at the UN Security Council followed by its referral to the International Atomic Energy Agency are conditions for a comprehensive deal.

They called on the Iranian negotiating team to strongly defend the nation’s dignity and strength and stand firm against Washington’s excessive demands.

The nuclear negotiations are at a critical stage as Iran’s Foreign Minister Mohammad Javad Zarif held an intensive round of talks with his American counterpart John Kerry in the Swiss city of Lausanne on Monday.

Zarif and Kerry are scheduled to continue talks on Tuesday as the delegations from Iran and the P5+1 group – Britain, France, China, the United States and Russia plus Germany – are trying to map out the outlines of an agreement by the end of this month.