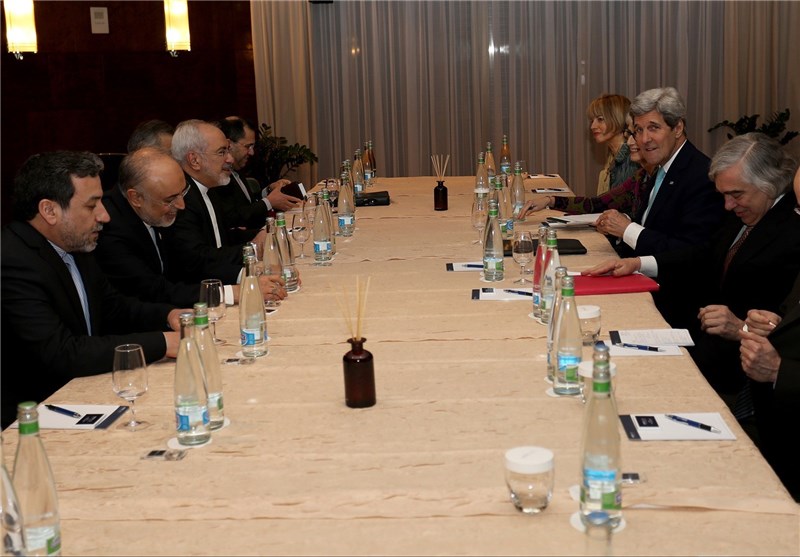 LAUSANNE, Switzerland — The United States and Iran on Tuesday resumed talks that have become clouded by the warnings from Senate Republicans that any possible deal to restrain Tehran’s nuclear program and ease sanctions could be reversed after President Obama leaves office.

Secretary of State John F. Kerry and Iranian Foreign Minister Mohammad Javad Zarif, following up on almost five hours of talks on Monday, returned to the negotiating table around 8 a.m. Tuesday in this Swiss city.

The resumption of talks came after Iranian negotiators Monday expressed concern over a letter from Senate Republicans warning that a nuclear deal with Obama might not outlast his time in office.

Both men led a team of negotiators with various fields of expertise. For Kerry, it included Energy Secretary Ernest Moniz, Wendy Sherman, the under secretary for political affairs, and Robert Malley of the National Security Council.

The letter was also raised in meetings Sunday between political and technical experts, said a senior Obama administration official.

Iranian and U.S. officials have been critical of the letter addressed to Iran’s leaders. It was written by Sen. Tom Cotton (R-Ark.) and signed by 46 other Republican senators.

Kerry has said its claims that Congress can modify an executive agreement are inaccurate. He also has said that its predictions of a short shelf life for a nuclear deal with Iran undermine his diplomatic efforts.

“I’m sure you’ll be shocked to know the Cotton letter came up in the talks,” the senior administration official said with obvious understatement — speaking on the condition of anonymity because of rules for briefing reporters.

The official would not characterize the tenor of the Iranian questions, other than to say they reflected “a concern.” But the official was dismissive of the letter’s overall effect on the talks, labeling it a “distraction, “unhelpful,” and “ill informed and ill advised.”

The United States and five other world powers have been negotiating with Iran for almost a year and a half, aiming for a deal that would restrict its nuclear program.

In return, the United States, the European Union and the United Nations would ease sanctions imposed on Iran. Iran says its program is intended for non-military uses, but some countries worry that Tehran wants to eventually build nuclear weapons.

The negotiators face a self-imposed deadline of March 31, set when an interim agreement was extended in November. The United States wants a signed agreement on the outlines of a final deal, to be completed in late June, but Iran has said it wants only one final agreement put on paper.

“We are trying to get there. But, quite frankly, we still do not know if we will be able to,” the administration official said. “Iran still has to make some very tough and necessary choices to address the significant concerns that remain about its nuclear program.”

Comparing the negotiations to lining up the pieces of a Rubik’s Cube, the official added: “You can get very far, and the last pieces are just too hard.”

The official declined to say whether there was more reason for optimism than pessimism but described the pace of the talks as veering wildly, from hour to hour on some days.

“It’s a bit of a roller coaster,” the official said. “One day we feel we may get there. The next day, or hour, we might feel maybe not so much. That’s why it is very difficult and challenging.”

Zarif was in a more upbeat mood, shouting out to reporters: “Finally, finally, we’ll get there,” as he departed for Brussels on Monday afternoon to talk with European Union officials and foreign ministers from the countries negotiating alongside the United States: Britain, France, Russia, China and Germany.