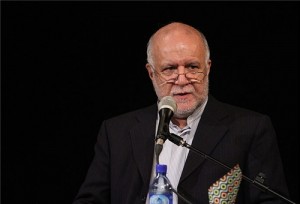 TEHRAN (FNA)- Iranian Oil Minister Bijan Namdar Zanganeh underlined that inauguration of Phase 12 of the South Pars energy hub has this very clear message to the 5+1 (the US, Russia, China, Britain and France plus Germany) group of powers that their sanctions against Tehran are ineffective.

“At present, the biggest phase of the South Pars is ready for inauguration and official exploitation,” Zanganeh told reporters on the sidelines of a ceremony to inaugurate the phase 12 of the South Pars oil and gas field in the Southern city of Assalouyeh on Tuesday.

He reminded that the giant gas project has been brought online simultaneous with the nuclear talks underway between Tehran and the world powers, and said, “This inauguration which is taking place despite the sanctions has this message to the G5+1 that the oil industry cannot be stopped by sanctions.”

Zanganeh, meantime, said that the current sanctions against Iran are cruel and have trampled upon the rights of the Iranian nation.

The biggest phase of the South Pars field, Phase 12, officially launched operation on Tuesday before the end of the current Iranian year (March 20) in a ceremony in the presence of President Hassan Rouhani.

In February, Managing Director of South Pars Oil and Gas Company Ali Akbar Sha’banpour elaborated on the features of Phase 12, and said, “Its area, and respectively production capability, is three times greater than the regular phases of the offshore field.”

Sha’banpour said that Phase 12 exploits three billion feet of sour gas from the seabed, equal to 84 million cubic meters, and after separating its gas derivatives, injects some 75 million cubic meters of sweet gas to the trans-Iranian gas pipeline network.

According to him, three main derricks and one satellite derrick are installed for the Phase 12, which altogether transfer that volume of gas to the refineries in the Iranian mainland.

He said that implementing the project took 110 months, equal to nine and a half years.

Phase 12 of South Pars, shared by Iran and Qatar, is the largest phase in this gigantic gas reservoir.

This phase is expected to start producing at least 500 mcf/d of gas before the cold season starts for injection into national pipeline.

The high-pressure flare of the refinery of this phase became operational in August.

Based on coordination made between the contractor and the outsourcer of the project, gas produced from the five wells of this field was delivered to an onshore refinery in December.

By drilling 12 wells, one billion cubic feet a day of sour gas is expected to be delivered to the onshore refinery. This amount of production started with 500 mcf/d.

Iranian engineers and technicians have been operating Phase 12 of South Pars with seriousness and testing different sections of this refinery.

Phase 12 of South Pars gas field is expected to produce 75 million cubic meters (mcm) of rich gas for delivery to national gas pipeline and liquefied natural gas (LNG) production plants. Out of this amount, 25 mcm will be injected to national pipeline and the rest will go for LNG production. This phase is also expected to produce 120,000 b/d of gas condensate and 750 tons a day of sulfur.

The main contractor in the development of Phase 12 of South Pars is Petropars Company. The onshore installations of this phase are located 70 kilometers from Assalouyeh.