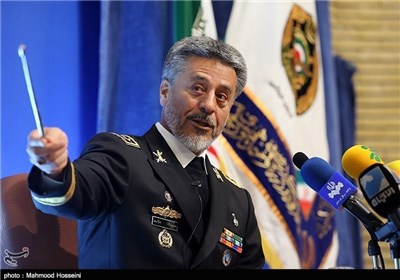 Describing navy a strategic force in Iranian Army, Admiral Sayyari emphasized on training expert, revolutionary, faithful, committed forces in navy. He also hailed deployment of Damavand Destroyer in navy fleet in northern part of the country and praised the destroyer as “outcome of coordination between academia and industry, and an honor for Iran’s Army and Navy.”

Sayyari deemed navy as representatives of the Iranian nation protecting national interests in open seas in any part of the world.

“Iran Navy deploys fleets to other countries to convey the nation’s message of friendship and peace to other nations,” he said and added that navy fleet 33 had in last three weeks docked in Sri Lanka and Indonesia and was expected to stop in India by next week.

Navy commander reiterated that the navy pursues defensive diplomacy in high waters by fighting terrorism and defending economic interests of Iran in open waters; he also asserted that Iranian ships were among the first fleets deployed to Gulf of Aden to fight against terrorist in the region.

Habibollah Sayyari dubbed foreign presence in regional waters as source of insecurity and concluded that “young forces in army are ready to confront any threats and defeat any possible attack by enemies.”