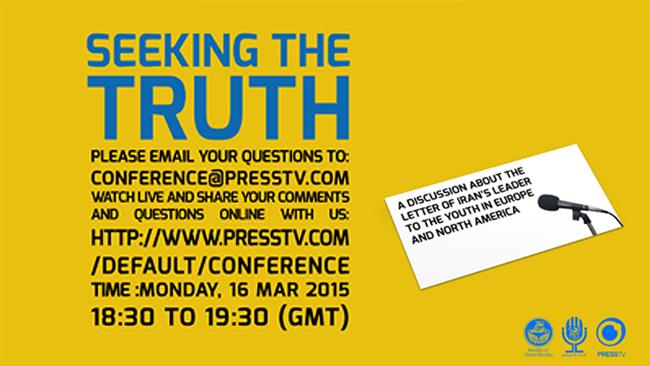 Iran to hold conference on Leader’s letter to Western youth

Iran is to hold a conference on Leader of the Islamic Revolution Ayatollah Seyyed Ali Khamenei’s recent letter to the youth in Europe and North America.

Iran is to hold a one-day conference on a recent letter by Leader of the Islamic Revolution Ayatollah Seyyed Ali Khameni to the youth in Europe and North America.

The conference titled “Seeking the Truth” is scheduled to be held in the Iranian capital, Tehran, on March 16.

The event is organized by the University of Tehran and will be held in collaboration with Press TV to discuss the Leader’s letter to the European and North American youth.

Scholars from different countries will attend the event. The latest news on the conference will be posted on the Twitter account @myLetter4u.

In January, Ayatollah Khamenei sent a letter to the youth in Europe and North America, urging them to study about Islam and to get firsthand information about it before accepting their governments’ propaganda.

“I would like to talk to you about Islam, particularly the image that is presented to you as Islam. Many attempts have been made over the past two decades, almost since the disintegration of the Soviet Union, to place this great religion in the seat of a horrifying enemy. The provocation of a feeling of horror and hatred and its utilization has unfortunately a long record in the political history of the West,” said part of the letter.

Ayatollah Khamenei criticized “the Western governments’ insincere and hypocritical treatment” of other nations and cultures and said, “The histories of the United States and Europe are ashamed of slavery, embarrassed by the colonial period and chagrined at the oppression of people of color and non-Christians.”

The Leader said the humiliation and spreading hatred and illusionary fear of the “other” have been the common basis of the so-called superpowers in the West.

“Therefore, don’t miss the opportunity to gain proper, correct and unbiased understanding of Islam so that hopefully, due to your sense of responsibility toward the truth, future generations would write the history of this current interaction between Islam and the West with a clearer conscience and lesser resentment,” Ayatollah Khamenei concluded.