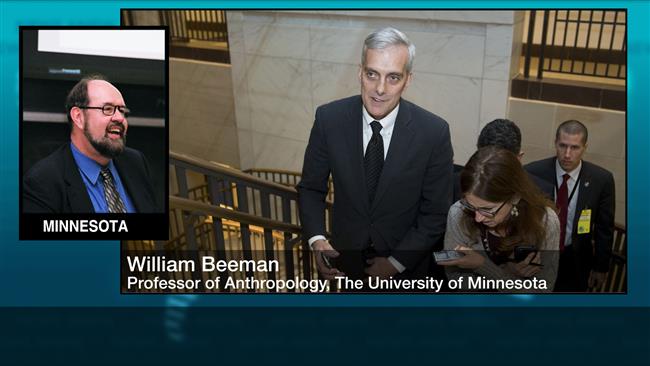 “The Senate and the House of Representatives in the United States are really very opposed to the president. Right now the Republicans are in the majority in both the House and the Senate, and they are doing everything they possibly can in order to embarrass President Obama and the Democratic Party,” Beeman, a professor of anthropology at The University of Minnesota, told Press TV on Sunday.

“The Iran negotiations are one of the ways that they can express their displeasure with the president without actually knowing anything about the negotiations or what kind of a deal they will reach,” he added.

The analyst noted that opponents of Obama presumed that the possible nuclear deal would allow Iran to make a nuclear bomb, but this is “ridiculous.”

“So they are trying to exercise their power in a way that is actually not in accordance with the US government protocol,” he said.

The professor explained that passing a law that would require Congress to approve any agreement with Iran is not legal.

“In the United States government, the executive branch that is the president is the one who actually leads and negotiates international agreements. The Congress does not have a role in doing this, the Congress can pass sanctions, as the sanctions that are with Iran but they don’t have any control over those agreements,” Beeman said.

“The problem here is not so much the negotiation with Iran. The problem is for the Senate and the House of Representatives to try to pass a law that is actually not in accord with the US government procedure,” he added.