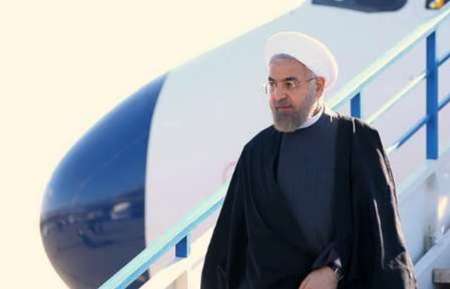 Ashkhabad, March 11, IRNA – President Hassan Rouhani left Turkmenistan’s capital city, Ashgabat for home minutes ago at the end of his official two-day visit during which he signed 17 cooperation documents.

The Iranian president who was on a visit of Iran’s northeastern neighbor at the top of a high-ranking political, economic, and cultural delegation attended a dinner banquet thrown in his honor by his Turkmen counterpart, President Gurbanguly Berdimuhamedow.

In addition to meeting and holding talks with President Berdimuhamedow, President Rouhani attended the meeting of the two countries’ high ranking delegations.

It was at the end of that meeting the 17 cooperation documents were singed by the high ranking officials of the two countries in the presence of both countries’ presidents.

Offering an address at the meeting of merchants and economic activists of Iran and Turkmenistan and participation in a joint press conference were among the other activities of the Iranian president in this visit.