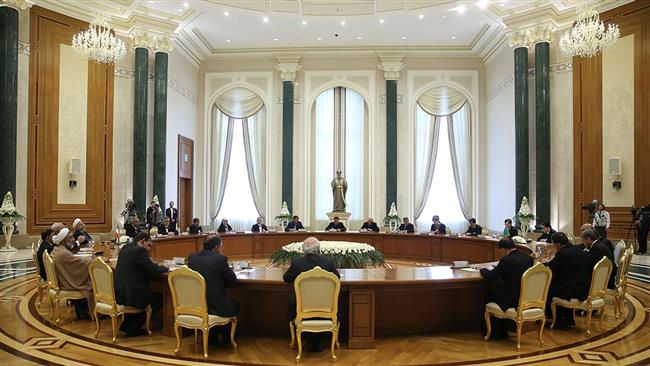 The Iranian and Turkmen presidents say they are determined to increase the volume of mutual economic transactions to USD60 billion within the next 10 years.

The agreement between Iran’s Hassan Rouhani and Turkmenistan’s Gurbanguly Berdimuhamedow to further boost ties was announced during a joint high-level meeting on Wednesday in the Turkmen capital of Ashgabat.

During the meeting, the two presidents underlined the need to tap into all existing potential for the further development of ties.

Stressing that the promotion of bilateral relations will benefit the two countries as well as the region, Rouhani said that “Iran and Turkmenistan are two important countries in energy production and should expand their cooperation in this regard.”

Tehran seeks to import electricity from Ashgabat and to export technical and engineering services to the Central Asian country, President Rouhani added.

Berdimuhamedow also highlighted trade ties with Iran and called for the enhancement of cooperation between the two neighbors in the energy sector.

He further thanked Iran’s backing for his country on the international scene.

Heading a delegation, President Rouhani arrived in Ashgabat late Tuesday on a two-day visit to discuss the expansion of ties between Tehran and Ashgabat.

The two countries signed 17 cooperation agreements in political, economic and cultural areas as well as cooperation on environment and fighting terrorism on Wednesday.