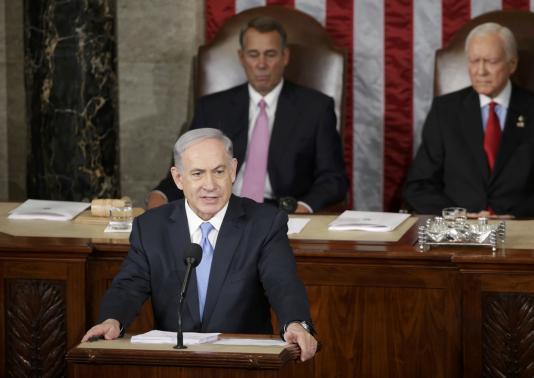 A symphony of hatred on Republican stage

What the US Congress can do to help the cause of global security rather than hosting the Netanyahu theatrics.

No, it’s not late. The handclaps are still being heard. The same hands are still at work, among other places, in Tikrit, Daraa, Aleppo, Sana’a, Tripoli, Kabul. The handclaps – which sound like of a slap across the face of the Middle East – will continue to be heard as long as the policies and decisions of the applauders remain unchanged and as long as the shrieks of Middle Eastern children, men and women are heard from this corner of the world.

No, it’s not late. There is still something to write about. The ceremony has yet to come to an end. It’s not going to end as long as the applauders straighten up and go out of their way to get engaged in combat; the show must go on. The handclaps will also drown out the voice of approval confirming a nuclear deal, if one is ever signed.

On March 3, Benjamin Netanyahu appeared before the US Congress and was given rounds of applause by members of the House of Representatives and the Senate. The claps of Republicans, who insulted the dignity and intelligence of world nations and those of their own constituents, are the only thing which will stay in mind and go down in history as “black comedy”.

Can the sounds of bomb blasts and artillery fire in crisis-hit flashpoints in the Middle East or the incessant roars of Israeli bulldozers in the occupied lands – which destroy Palestinian houses and have once even crushed an American journalist to death – be drowned out by the prolonged deafening rounds of applause by some impertinent US politicians?

Never! The orchestra which performed on Capitol Hill, conducted by the Israeli prime minister and organized by John Boehner, was playing a symphony of hatred – a prelude to beating the drums of a third world war.

Instead of soldiers and marines [boots on the ground], you can send your people as tourists to the Middle East and wish them a good trip. Instead of allowing their bodies to speak in history, let them recall their memories and share with you the delight of living with the noble and emotional people of the East.

People like Netanyahu will lay waste to the world of which Israel is only a tiny part. So it would make sense if I asked: Why is it that Israel is always afraid of being destroyed? How is it that Israel makes this threat more believable by accepting the likelihood of the [existential] threat coming true?

Over the course of history, there have been governments whose existence has been a bone of contention. Basically, threats by enemies to topple a regime are nothing new. But in today’s world, existing international mechanisms (despite downsides and the reforms they need) make it impossible to annihilate a country. But Israel seems to have accepted that it is destroyable. If that destruction ever comes true, it would be the echo of these rounds of applause and handclaps.

Here I would like to offer a piece of advice to Speaker of the US House of Representatives John Boehner.

After your friend and special guest, Benjamin Netanyahu, joined you and your colleagues in the chamber – amid tumultuous applause – and shook hands with members of the audience, he approached the podium where you sit. It was now your turn to welcome him and offer a piece of advice to demonstrate the depth of your cordiality, not just to your dear guest, but to the American electorate. Right then something unfolded which may have captured the attention of very few people. I found what you did strange for a number of reasons.

Watch the video of the speech and review what happened there. In one scene, just like a best man you whispered into the Israeli premier’s ear, “Fix your necktie; be careful about your outfit!” I did not read lips, but what took place in a split second was truly a short and meaningful pantomime. Benjamin immediately retracted his hand and fixed his tie.

Your Excellency! Please care about global issues, for the Gordian knots in the way of international peace and calm – for part of which your constituents pay a heavy price – as much as you care about your dear friend’s necktie. The outfit you have made the world put on through arrogance and bullying is ill-fitting. It is bad-looking and unshapely. It deserves more subtle attention than Netanyahu’s suit. Such attention might help order return to the world.

It would be a good idea for war hawks to learn – before it is too late – that a fire has been smoldering under the ashes of war and bloodshed in the Middle East, from Iraq and Syria to Afghanistan to Yemen, a fire which will engulf the world –of which Israel is only a tiny part – and whatever therein.

It’s a good idea if the world’s war hawks and extremists – among them the Republicans, European skinheads, Arab sheikhs and their pawns including Alqaeda, ISIL, the al-Nusra Front, and Zionist Conservatives as well as unorthodox Shiites and Sunnis in Islamic societies who beat the drum of war and have been caught in the crossfire of civil war – know that the Middle East is still the source of energy.

This time around, the energy, which will be released someday, is not underground; it has found its way onto the surface. Unlike oil it is already on the surface! This energy is simmering in the men, women and children who have felt strangulated following years of oppression at the hands of unbridled Capitalists in the world and the greedy local tyrants.

Their patience is running thin and they are on the verge of eruption. Now they know who has smoothed the way for the miserable life they live; those small groups of people who will learn shortly that ISIL and others are only the attendants of a train which take tens, hundreds and/or thousands of them to a destination of death any moment, each day and month. They know the [train] engineers and have learned about the division of labor among the strangers and insiders.

Your Excellency! Pause for a moment and think about it. There comes a day when the energy of the oppressednations in the Middle East will not rev up the engine of factories and industries and will instead destroy the possessions and savings of the human civilization.

All world nations, including Islamic states which have suffered scars and injuries, have exercised restraint and are still ready to cooperate and live peacefully with major powers, decision-makers and leader of the international community. Do not miss out on this opportunity simply by applauding a war criminal.