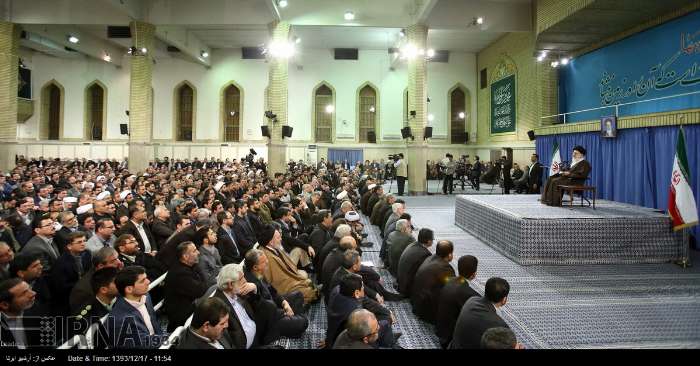 TEHRAN (FNA)- Supreme Leader of the Islamic Revolution Ayatollah Seyed Ali Khamenei called on the government to take firm and serious steps to protect the country’s environment and green lands.

“Islam and the divine religions have always underlined the necessity for humans to feel responsible for the nature and maintenance of balance between the human being and his environment since the main cause of environmental problems is when this balance is disturbed,” Ayatollah Khamenei said, addressing environment activists and state officials in a meeting in Tehran on Sunday to mark the National Week of Natural Resources.

Describing environmental challenges as a global issue, he said, “The experiences of different countries show that many environmental problems can be prevented or resolved.”

Ayatollah Khamenei referred to air and environmental pollution in big cities, and said these problems can be resolved through patience and necessary follow-up measures.

He also underlined the necessity for protecting the woods and pastures, and called for serious confrontation against those attempting to damage the environment and those officials who neglect their responsibilities in this regard.

The public meeting with the Leader today was particularly important as it put an end to Israeli driven rumors in the social media and a number of western websites in the last three days that alleged the Iranian leader has been hospitalized due to critical health conditions.

Some western media outlets pushed the rumor so much that they claimed Tehran would soon announce the leader’s demise.

The western, and specially the Israeli media outlets have scattered similar rumors a dozen times in the last two decades.