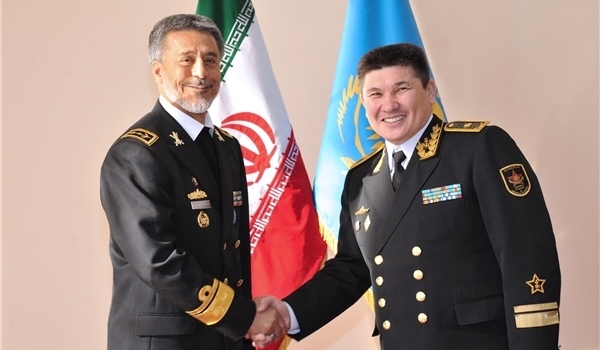 “Astana is willing to expand its defense ties with Tehran,” Rear Admiral Zhanzakov said in a meeting with his Iranian counterpart Rear Admiral Habibollah Sayyari in Astana on Monday evening.

The Kazakh navy commander underlined the need for exchange of delegations between the two countries’ navies.

He underlined the importance of bolstering cooperation among the Caspian littoral states for regional security and preventing foreign intervention.

Rear Admiral Sayyari is leading a high-ranking delegation to Kazakhstan to visit the Central Asian state at the invitation of his Kazakh counterpart.

In October 2013, the Kazakh Navy commander paid an official visit to Iran at the invitation of Rear Admiral Sayyari.

Rear Admiral Zhanzakov held talks with the Iranian navy commander at the venue of the Navy Headquarters at the time.

The Kazakh military delegation also paid separate official visits to the Army’s 4th Naval Zone in Anzali port in the Caspian Sea and the Late Imam Khomeini Naval Science Academy during their stay in Iran.

In mid-August 2013, senior armed forces’ officials from Iran and Kazakhstan in a meeting in Astana explored avenues for developing and consolidating bilateral ties and cooperation, specially in military fields.

During the meeting in the Kazakh capital at the time, Iranian Military Attaché in Astana Hamzeh Rouhi Kabarg and Commander of Kazakhstan’s Army Ground Force Murat Maikeyev underlined the need for the further expansion of mutual military cooperation between Iran and Kazakhstan.

The two sides also discussed issues related to the broadening of mutual cooperation between the ground forces of the two countries’ Armies.